The Willow SRS residents enjoy driving their own creativity and owning their creative voice. Many of the participants have a strong vision and focus in their art.Therefore projects  Fiona Halse and Natalya Garden Thompson created  for the SRS residents during this July – December period were created in response to feedback on creative plans, development of work that was ‘exhibition ready’. There was also arts participation project ‘ Home’ with the Arts Centre  and promotion of local SRS studios and Arts Access Victoria at Melton City Council Carers Expo.  All of these projects aimed to try create low costs promotional opportunities for the SRS artists and for Arts Access Victoria SRS programs.

During the SRS pop-up studios sessions from July to November 2104 a number of  projects were delivered:

Willows Art Group was involved in:

Home is a large scale participatory art project that offers everyone a chance to explore and celebrate the ideas, stories, memories and emotions that the thought of home can invoke. SRS residents all created a house to be part of this project and some houses were exhibited at the Melton Visitor Information Centre Exhibition.

On 10 January 2015 Home will be launched with all the wooden houses gathered together and proudly displayed in and around a supersized installation called ‘The Big House’ on the Arts Centre Melbourne lawn - which will be home to 16 days of free workshops, music and performances.

Highlights included:
The Arts Centre ‘Home’ project sparked ideas with Richard Smith who created a beautiful collaged wooden house in his room in his own time.


Highlights from the Willows Art Group:

The proposal of using the library cabinets to display text based works sparked an interest in writing and it enabled these strong visual artists to explore different approaches to creating art. It also gave SRS residents ICT skills when choosing font and formatting.

On 5th November 2014 there was a soft launch of the Melton Visitor Information Centre Exhibition  and Melton Library exhibition for text based work. Councillor Bob Turner personally congratulated all participants and Arts and Culture and Economic Development and Tourism Council representatives were also present to recognise the SRS residents art and written works.

Jarna Lee Wilson was able to personally explain about her ideas about nature spirituality and poetry to the general public and other SRS artists.

There was a small catalogue created for the Melton Library exhibition to enable cross promotion between the two council venues.

The pop up SRS studio sessions  ( February - June 2014) had a similar ideology to the initial pilot program where artists were encouraged to explore their personal vision and aesthetic. But mid-way through the session the SRS residents seemed ready to try a set project and new mediums. Many Willows SRS residents were familiar with working with the foam etching plate and acrylic paint. This is due to many of the SRS residents being involved with Nebula in 2013 at Djerriwarrh Festival. All SRS residents were keen to express pride about their creative abilities through completing two door murals that face McKenzie Street in Melton.The approach was simple - small square panels were painted in yellow based colors and printed in contrasting colors and these were assembled in grid pattern. It was suggested to the residents that home based imagery could be explored as it related to the door and SRS home. All participants were included in the mural.

Ziggy Okrasa added to the mural by writing in his calligraphic style  what he would 'say to the aliens if they came to the SRS door'.

Stella Stratis and Rose Sita did not enjoy the printing process, so they created paintings inspired by rainbows on the small panels instead of printing. These paintings were installed next to the door as its own separate mural late in the session.

Several SRS artists created paintings on small canvases and these were hung in salon style on a wall in the dining room.
Development of SRS Artist profiles
Within these sessions there was also a development of written artist profiles. These profiles allowed the SRS residents to reflect on their own work, summarise their key ideas and express to others what they value within the arts. These written artist profiles were workshopped with the residents and are now online and exhibited as a label for the artwork in 'their gallery'
Link to Artist Profiles 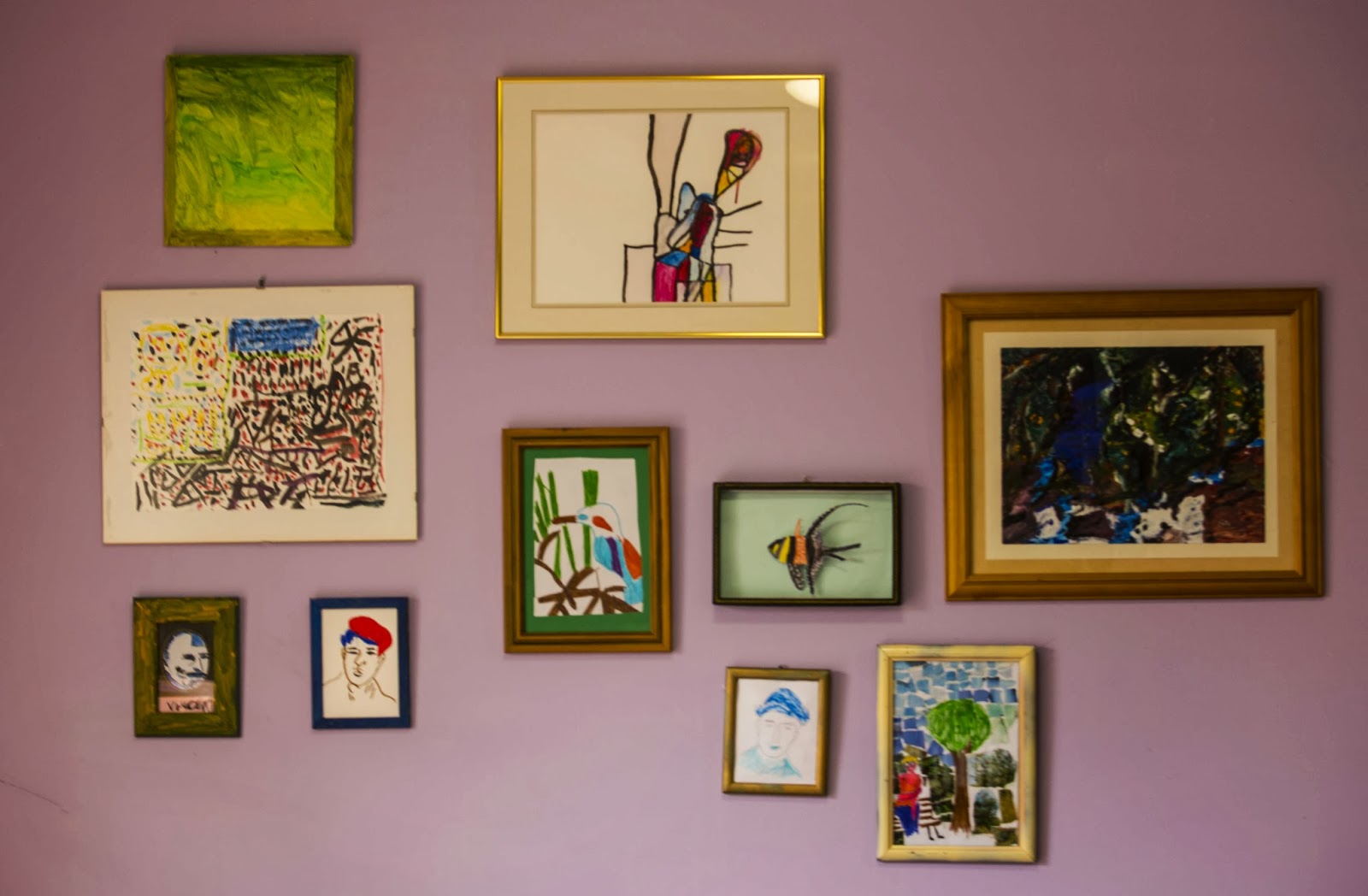 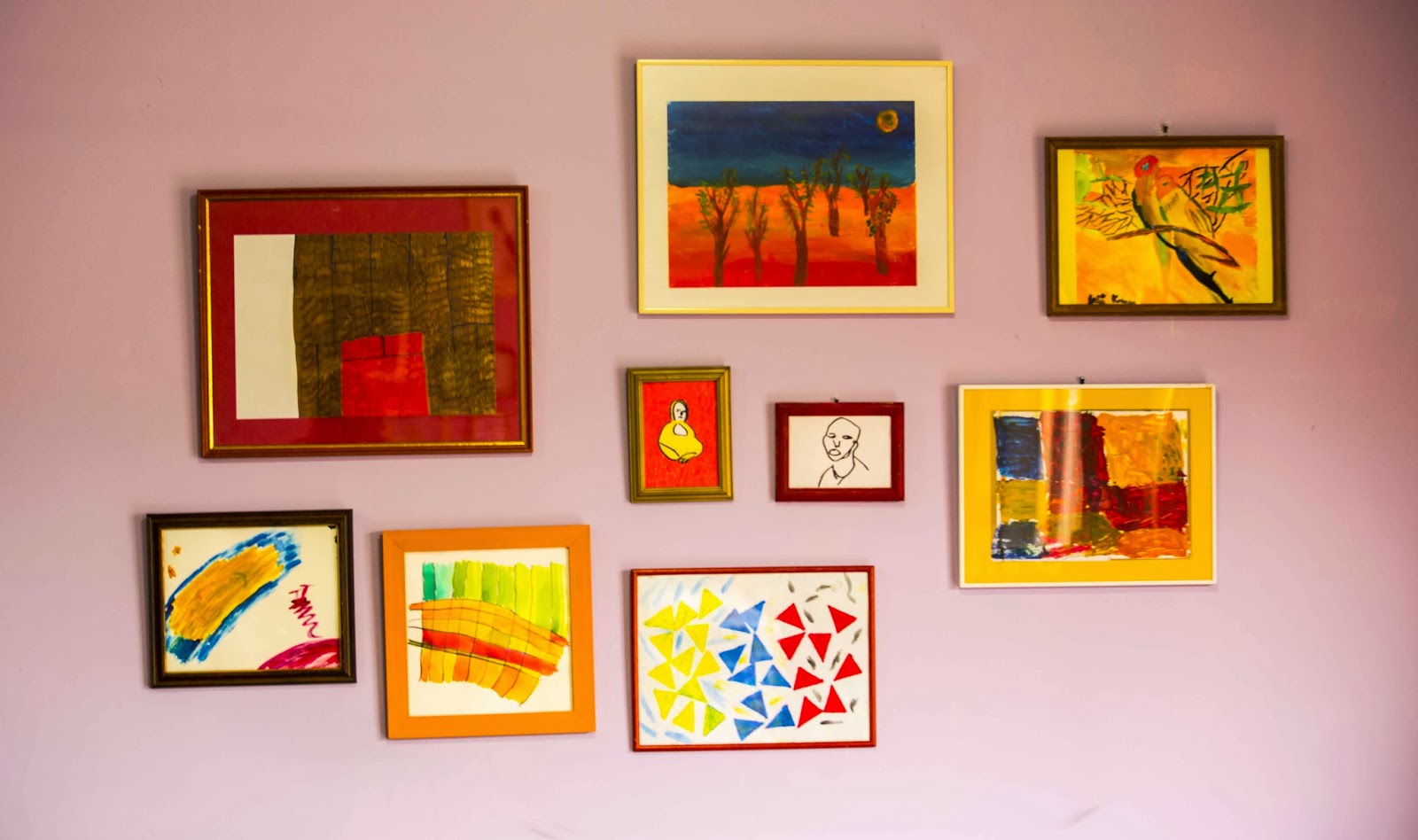