Fusion Arts Studio emerged from a group of artists converging to create works from their hub at Chippendale Lodge, experimenting with a range of media and forming key relationships with the local community.


The studio was abuzz with activity, the Fusion artists drawing upon their rich vocab in a range of mediums to drive their own outcomes today.
Newcomer Sarkis, not having painted since primary school, gave us a range of acrylic works in his favoured black and Julio and Kate did some printmaking onto t-shirts. We are considering a group installation piece where the artists hang their individual t-shirts onto a rack.
We were excited greet our new volunteer, Ellie, to the program!

"Maybelle could be a cat or a human" - Artist Kate Simms.


We have initiated a language swap to begin our sessions. Despite meeting in the afternoon, we now can say 'Good Morning' in Vietnamese, Egyptian, French, Indonesian, Italian and Somali! Go team! Chao Buoi Sang!

One form of storytelling we know that transcends language differences is the ancient art of puppetry.

Today, we peered into a host of different puppetry methods, from Indonesian Wayang to Vietnamese Water puppetry, hand puppets, shadow puppets, finger puppets & more... Which did we enjoy the most? We observed the different forms according to mood, music, actions, sound, costumes and characters.

As a group, we've resolved to make a comedy skit about a fairytale character being pestered for cigarettes - an experience common to the group members. We'll film it and see how we feel about performing this.

Here are some snippets of some quick sketches the artists produced.

Who were we to waste sunshine on a day like this? 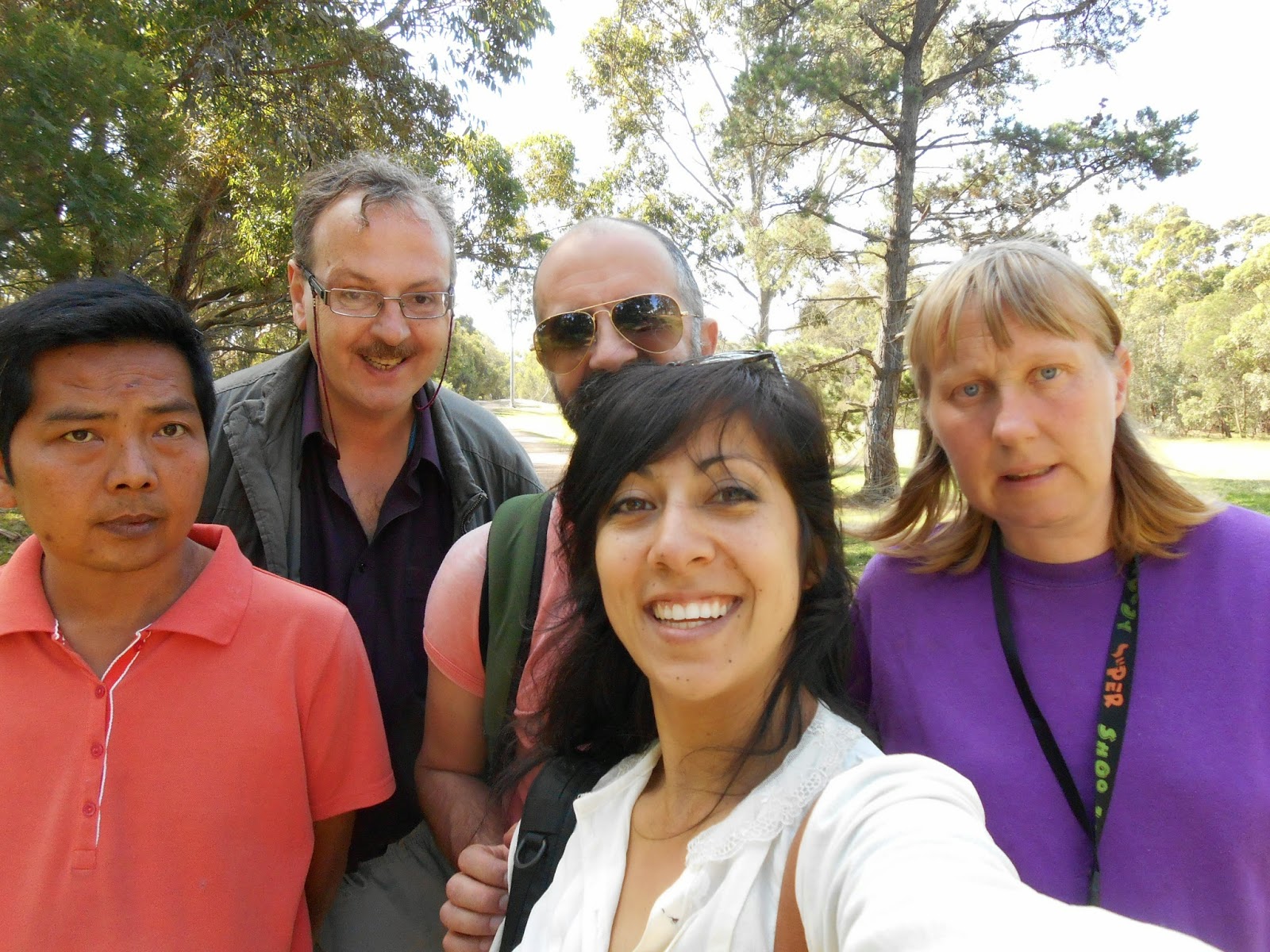 Fusion Arts Studio today went mobile, gathering our tools in a backpack and exploring the local community on foot. We further enriched our engagement with the theme of PLACE.

Kate led the way, creating a visual story of her regular footpath stomp to the local cafe. 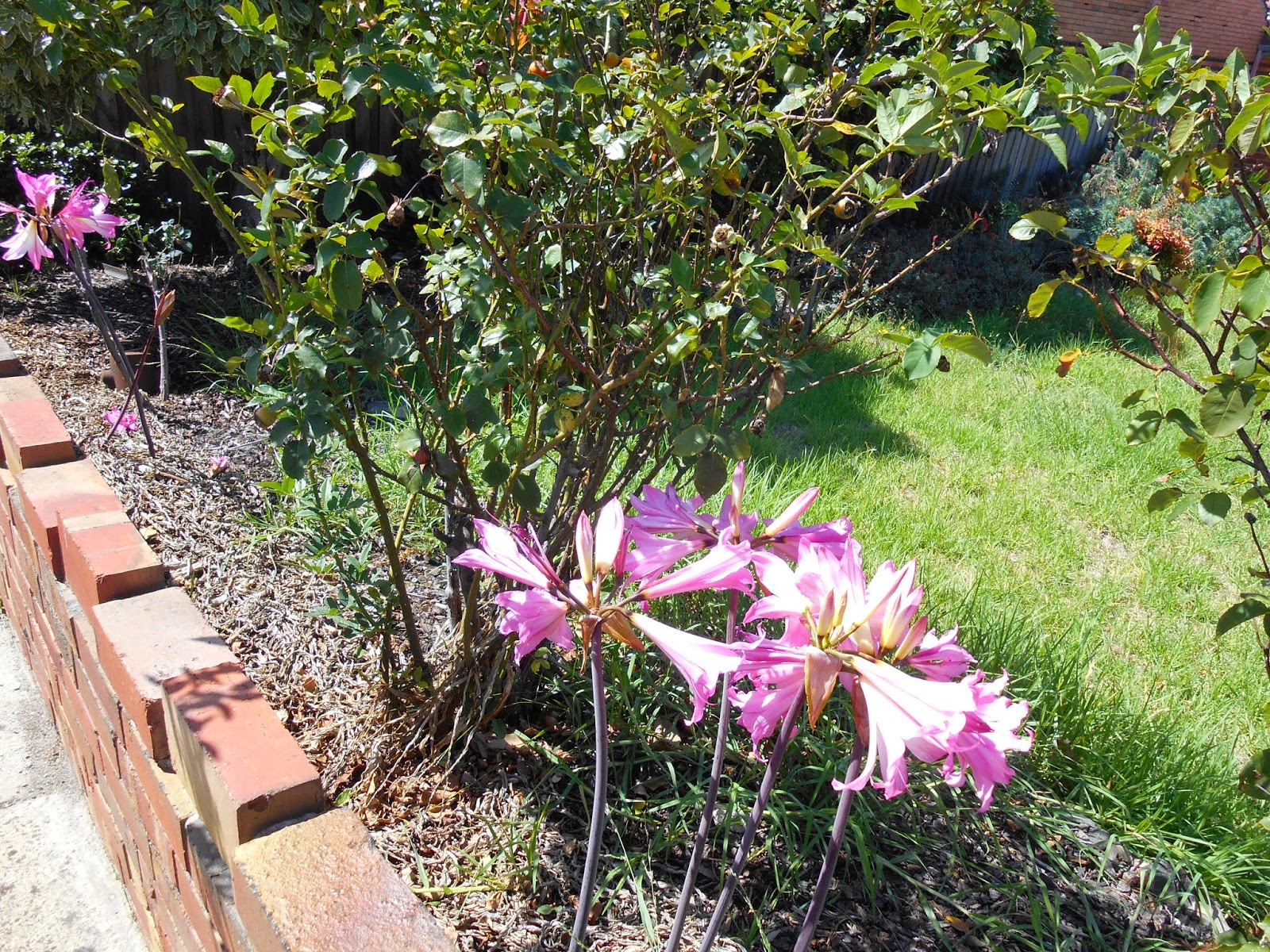 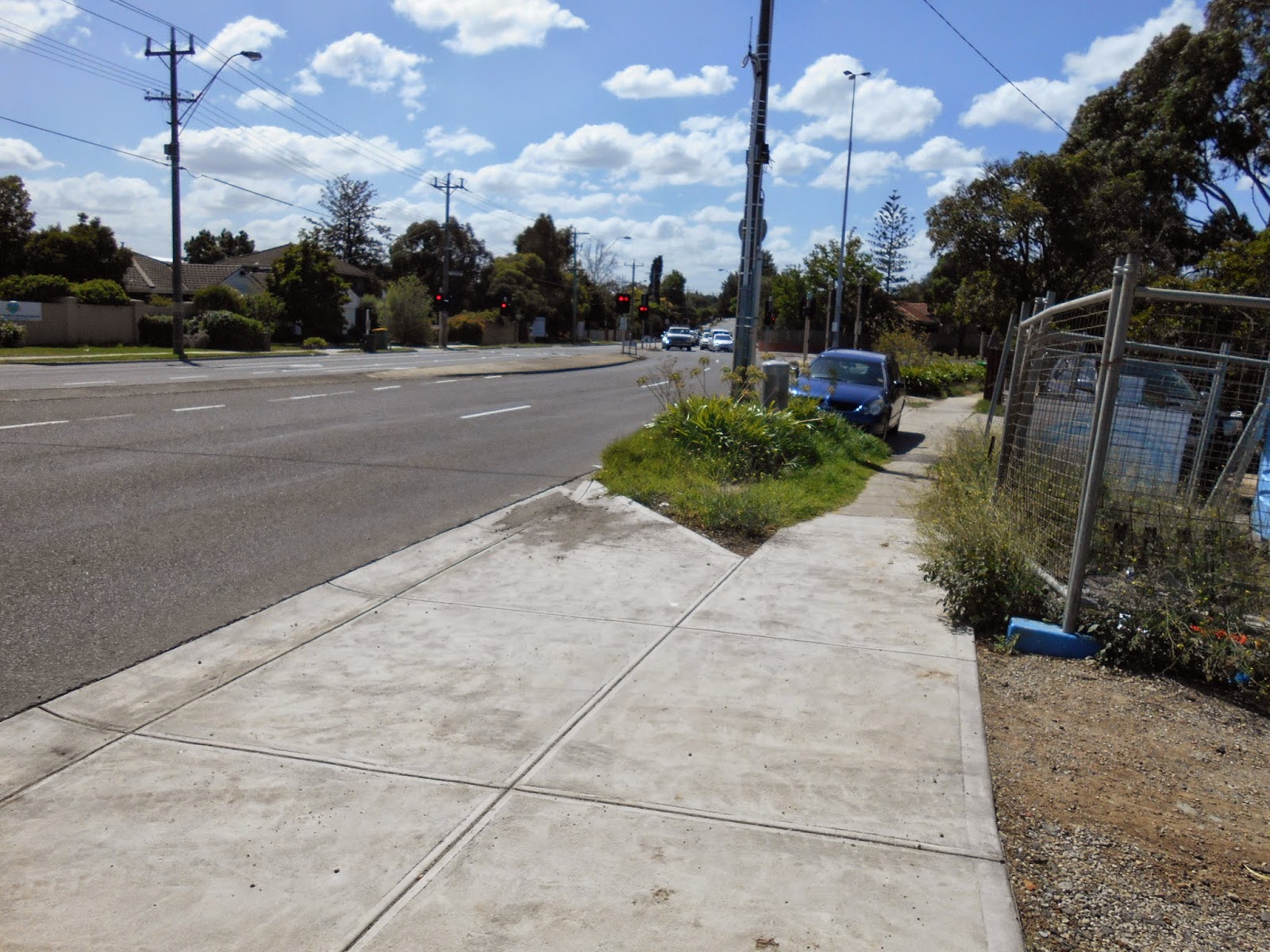 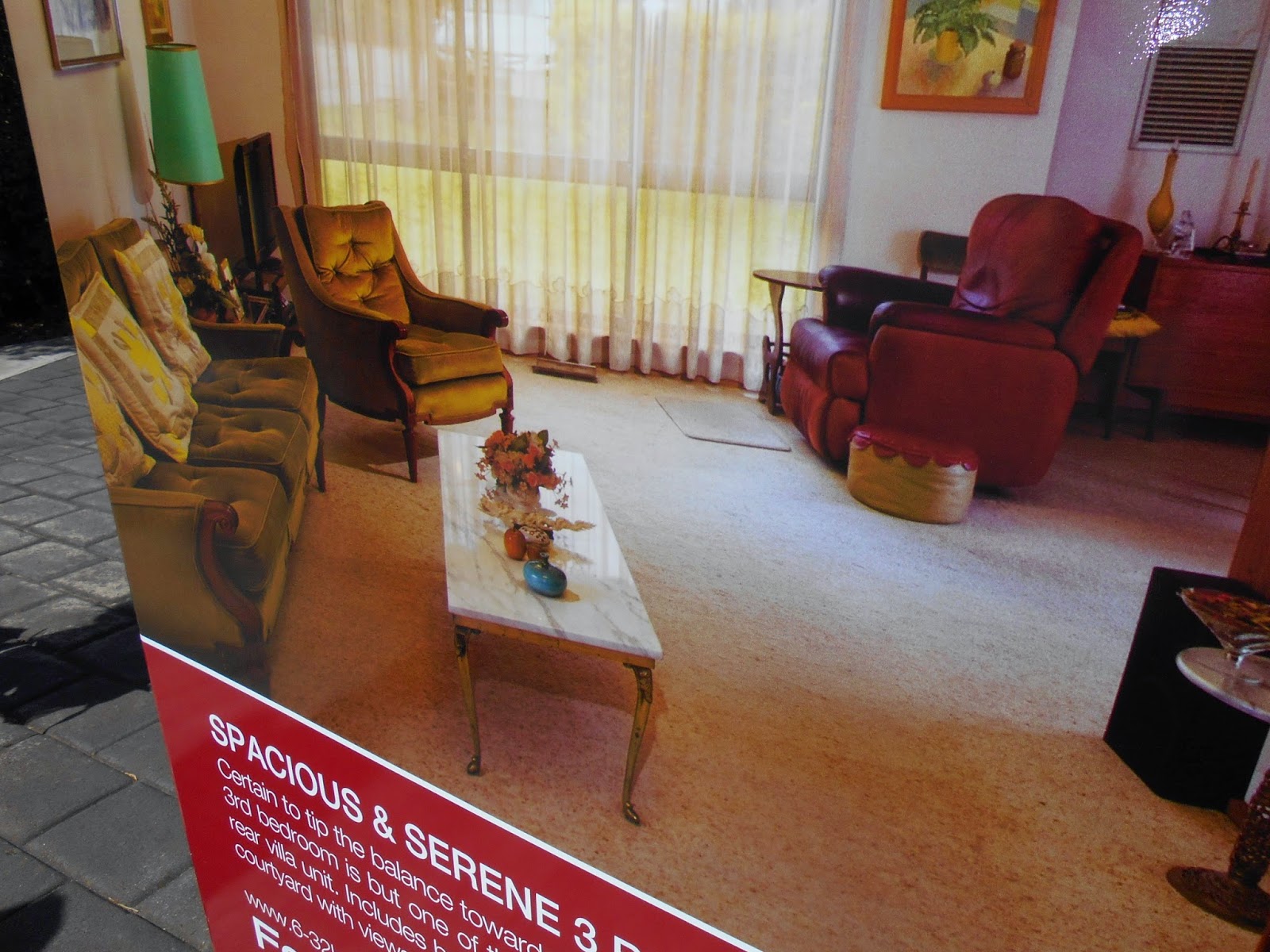 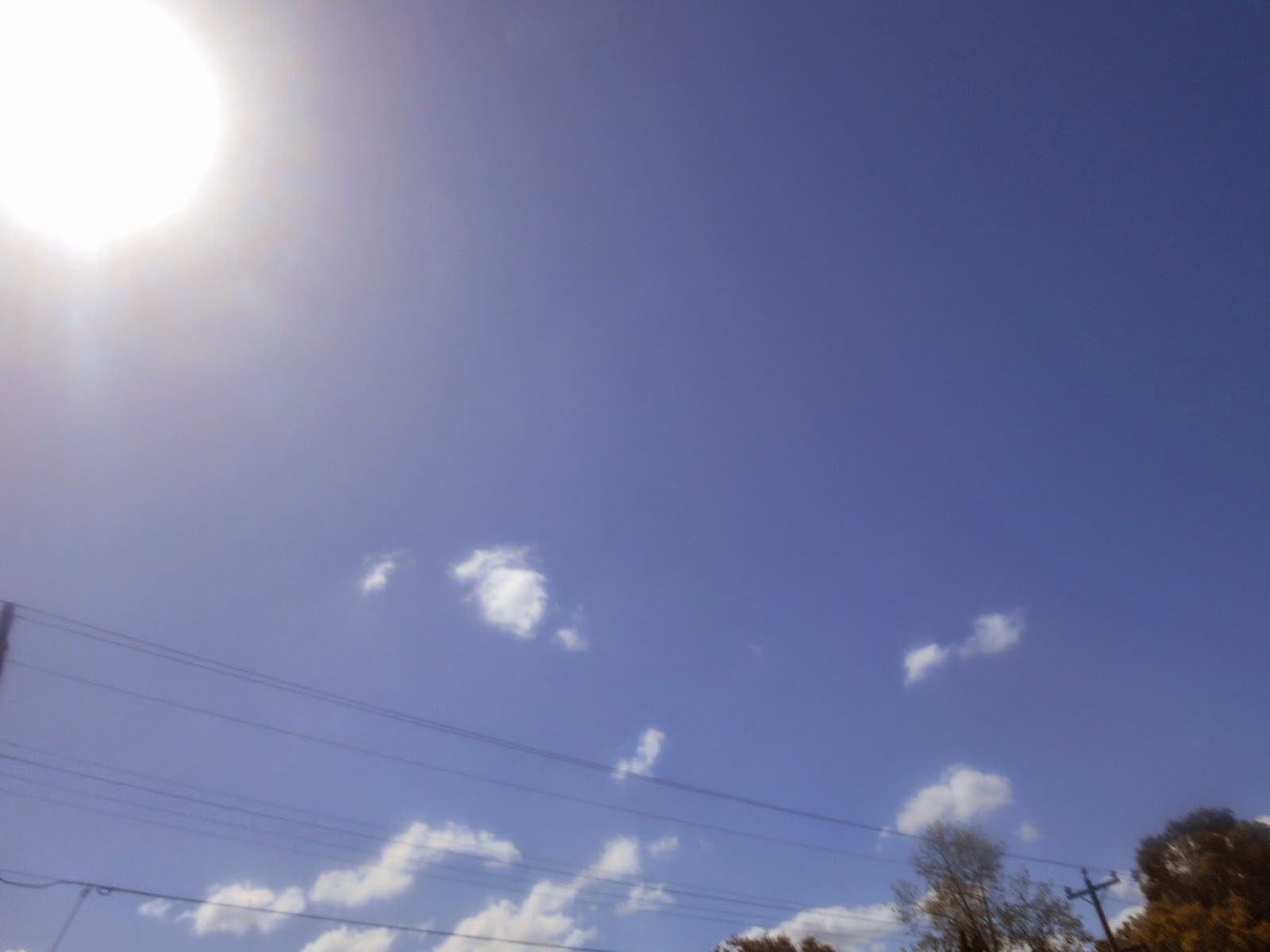 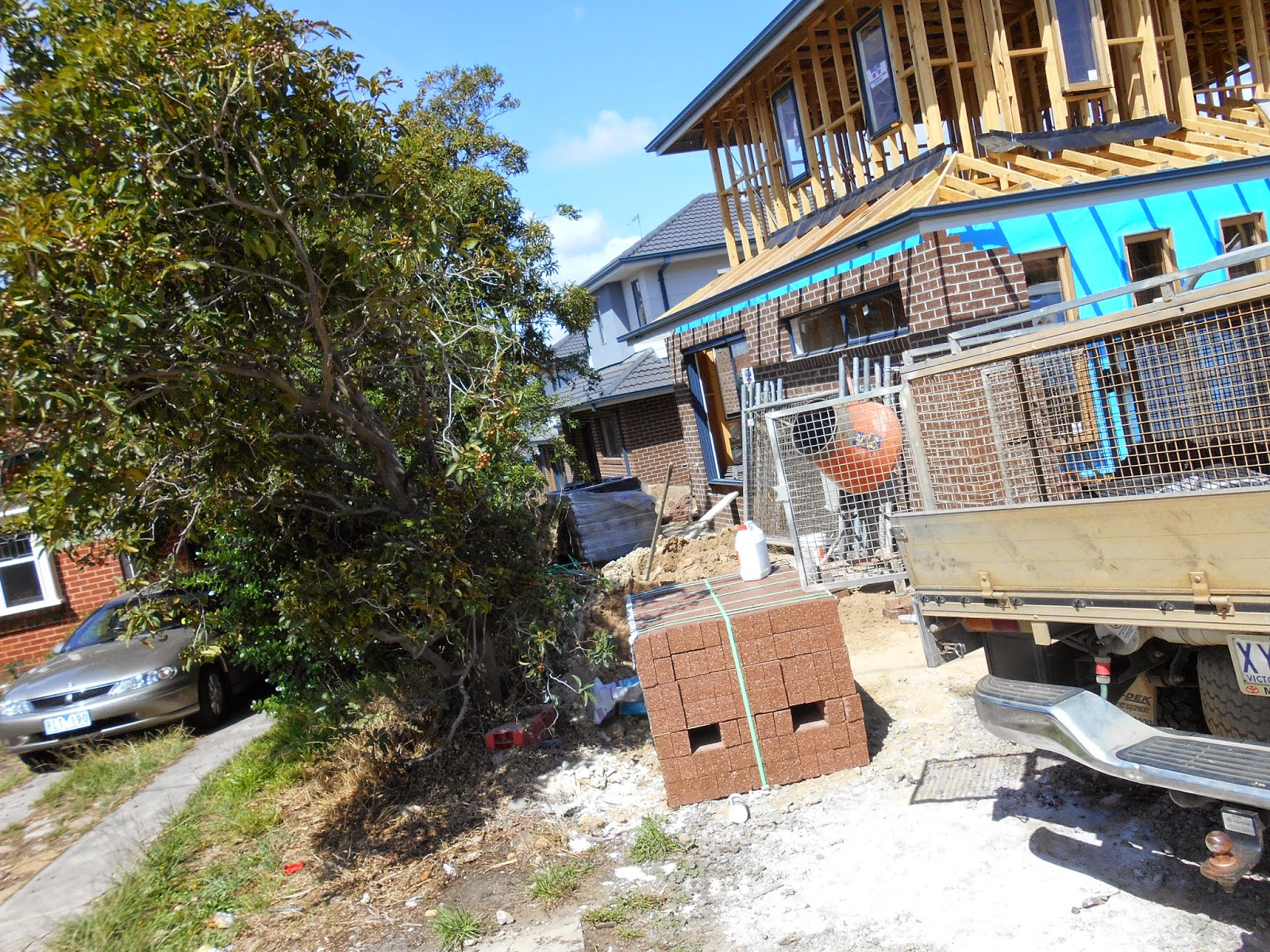 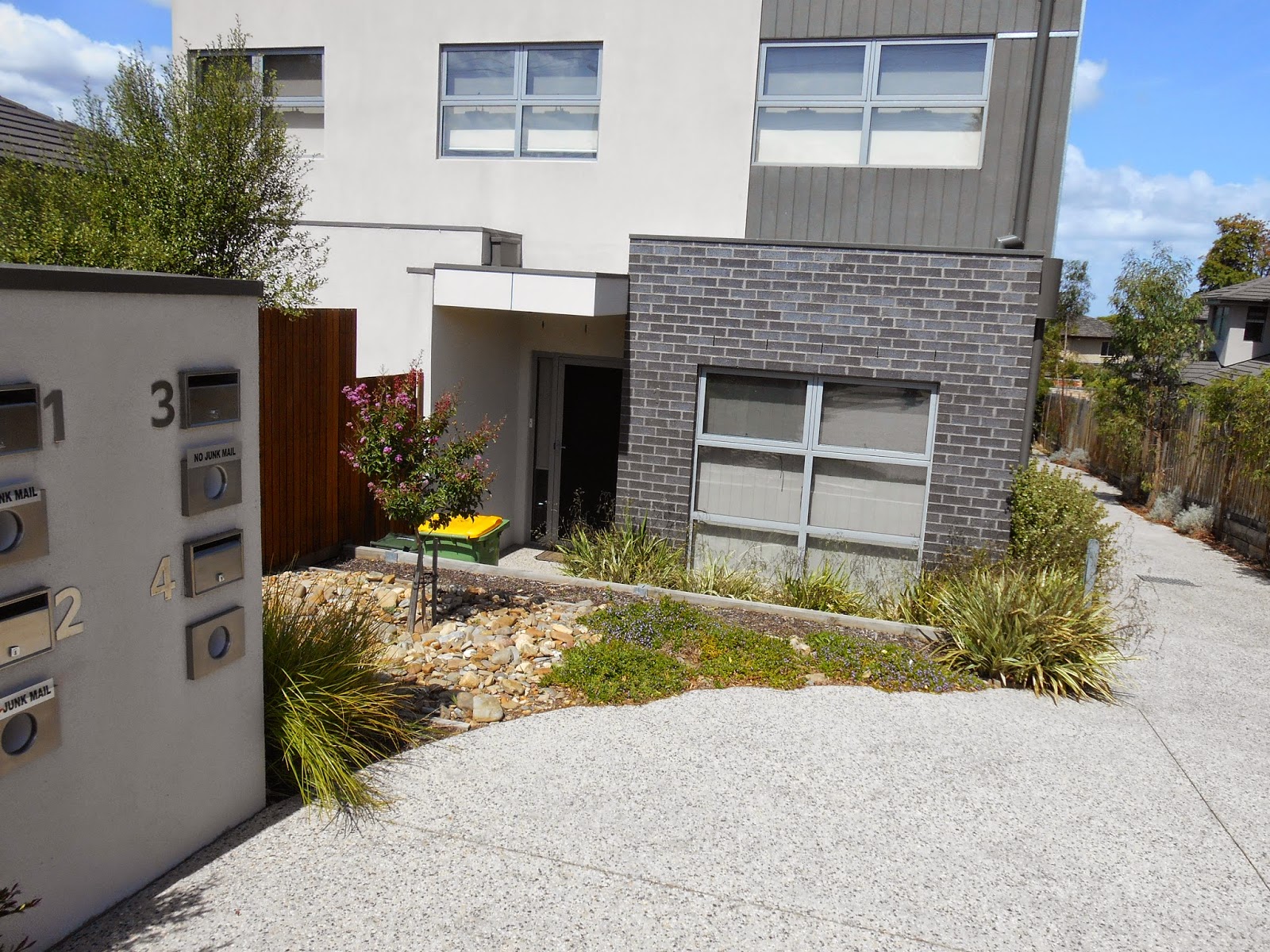 Julio offered some incisive poetic verse, musing on the mentalities of modern living and the wisdom of trees.

It's gotta be lived in

Some people say that we're separate from God but then you look at the trees. You see that we're all connected.

Scooter's Cafe, doubling as a gallery, was interested to meet the artists. After a brief discussion and the flashing of our best smiles, the owner invited us to exhibit works on the cafe wall...
WATCH THIS BLOGSPACE!!!!!! 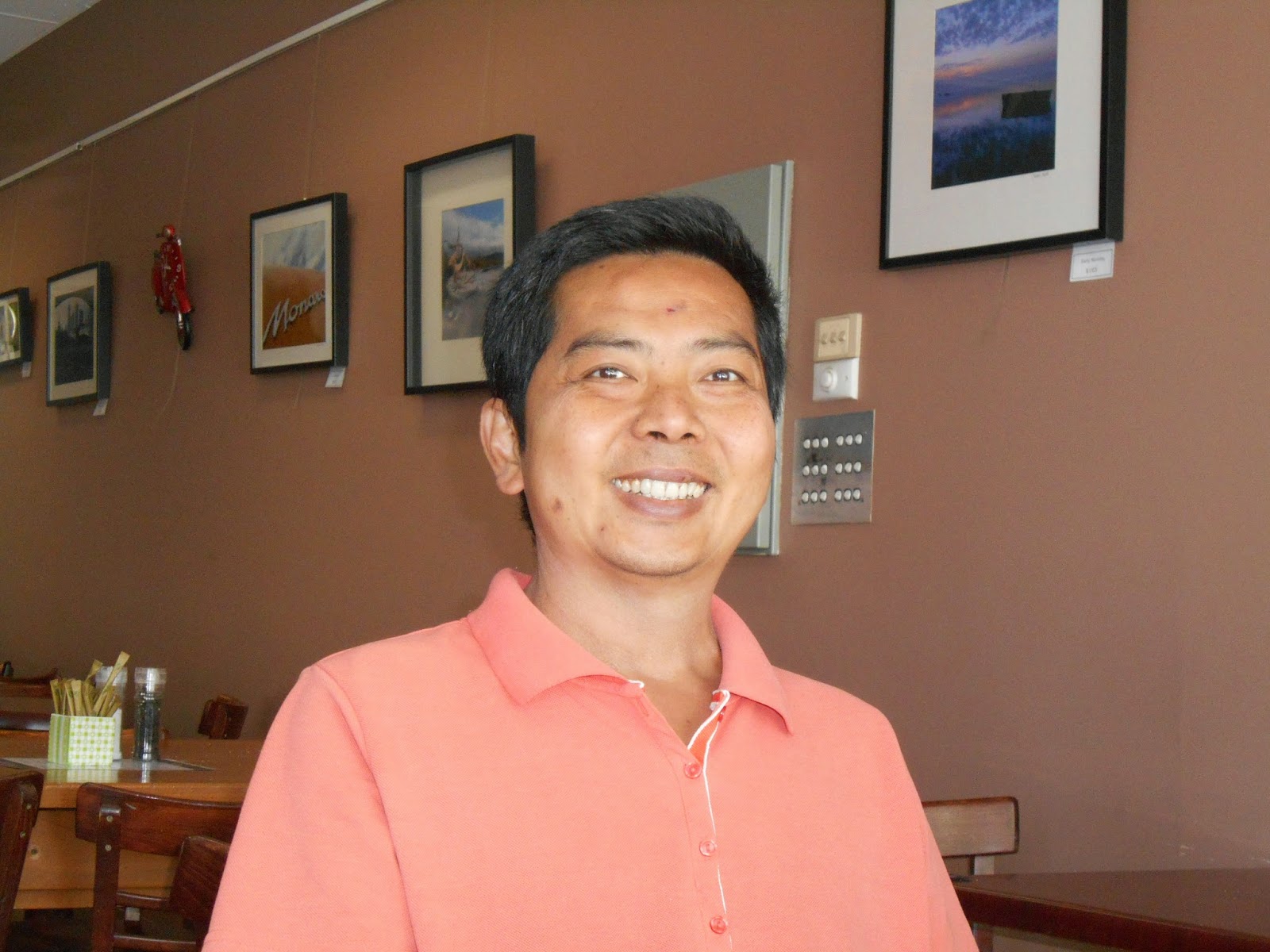 Now excited and over-stimulated with caffeine, we ventured through the light and leafy Rosanna Parklands, taking a quiet hour to make impressions from the surrounding natural environment. Rubbings, tree portraits, more poetry... 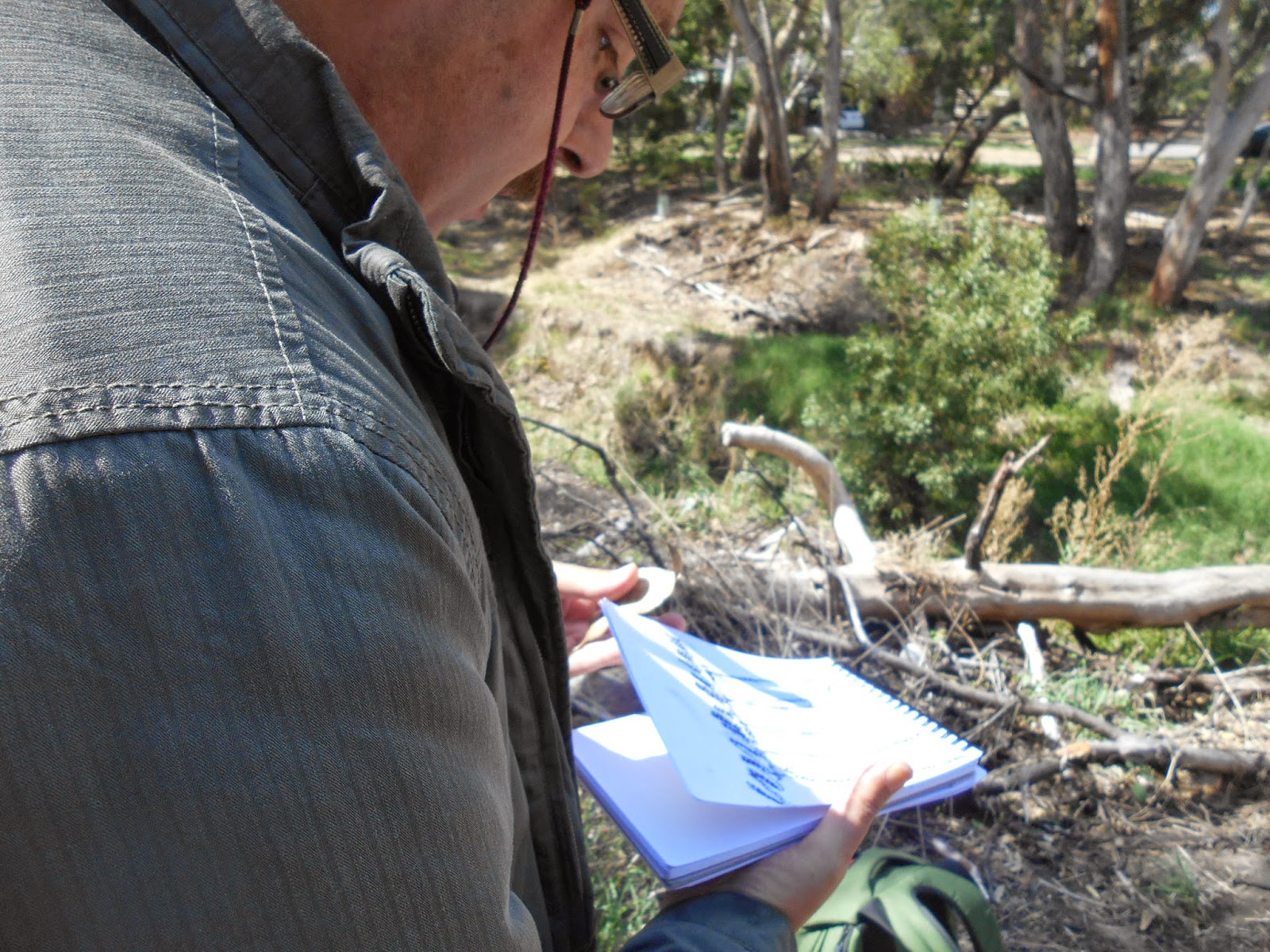 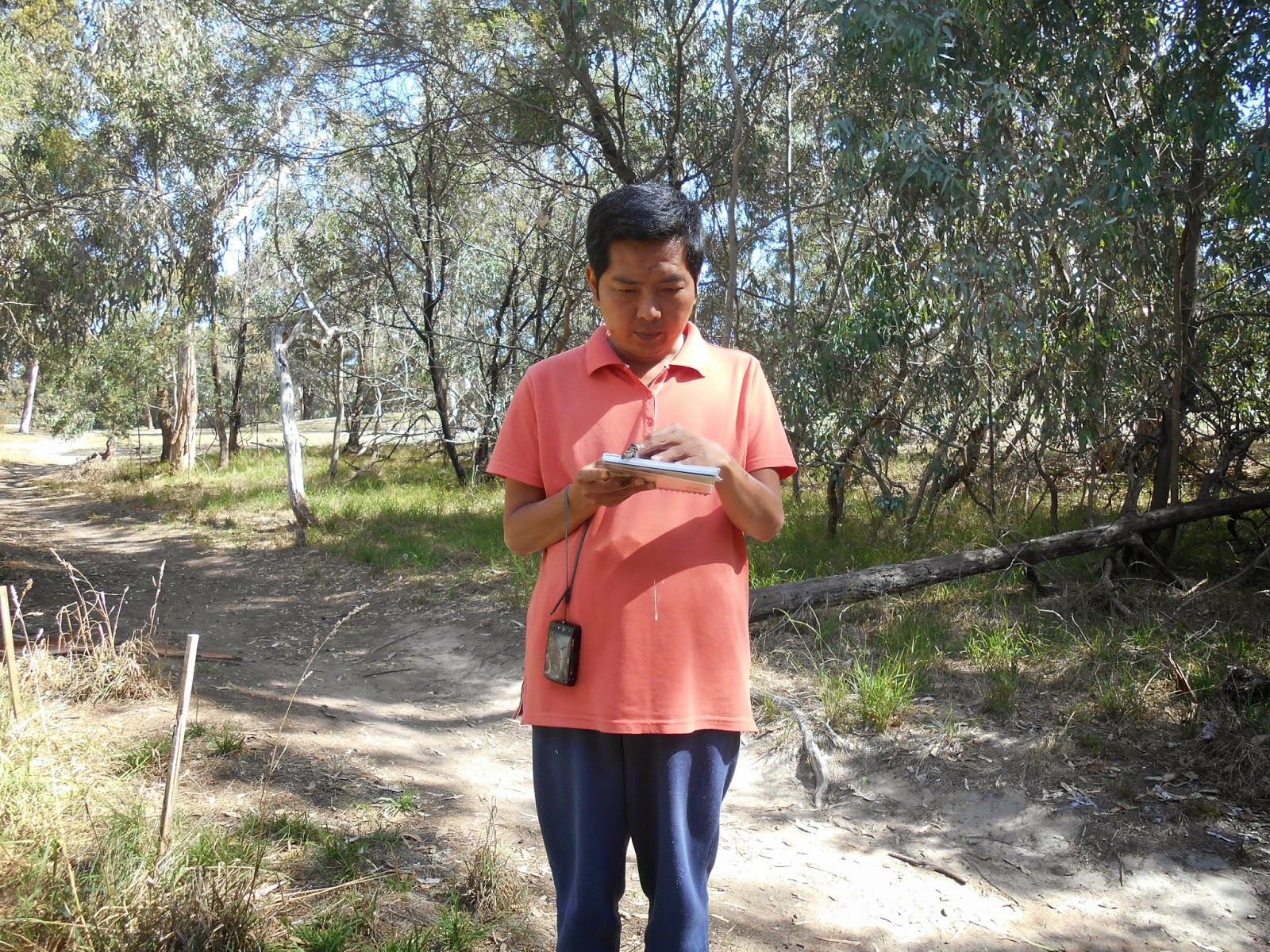 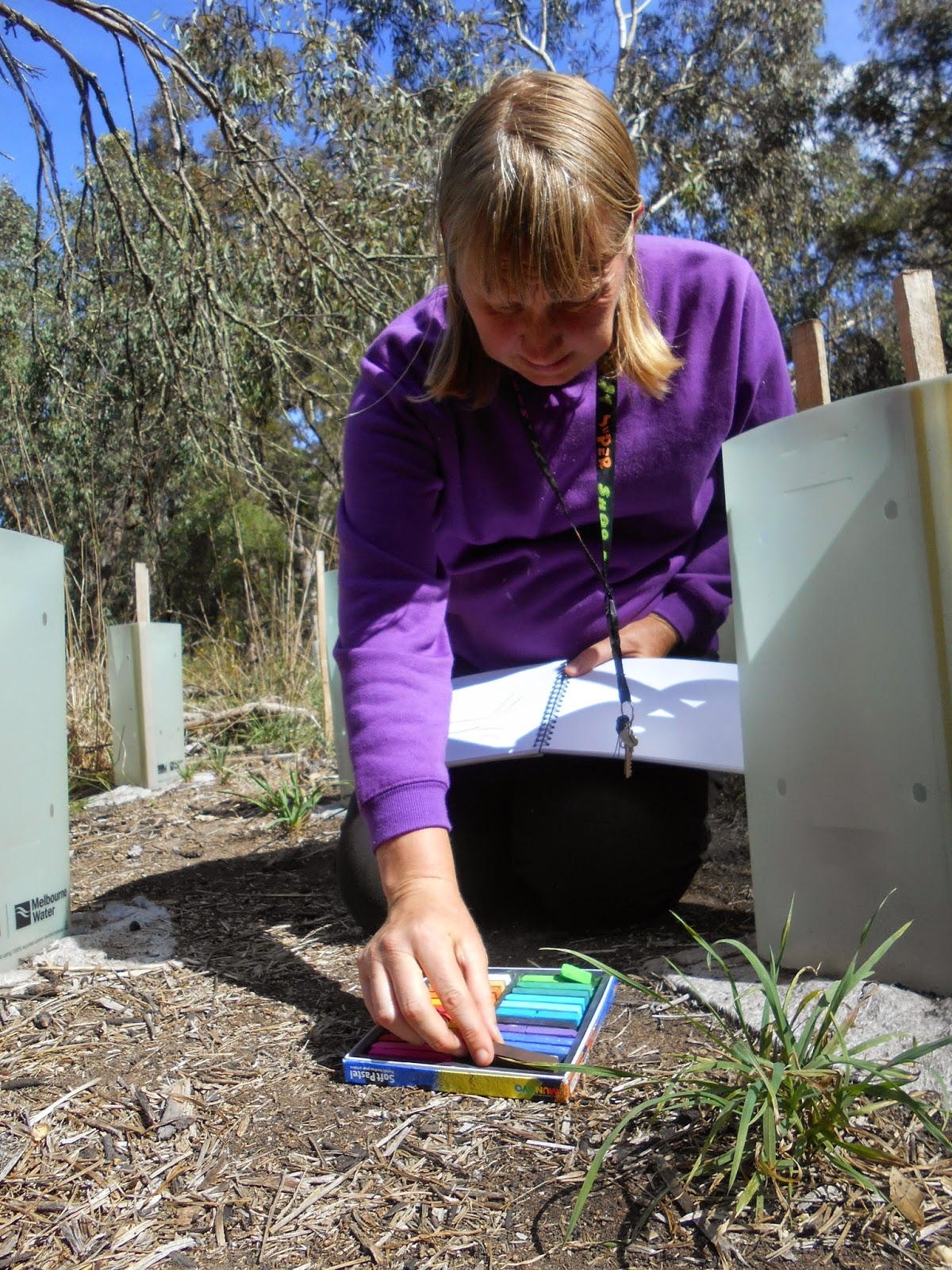 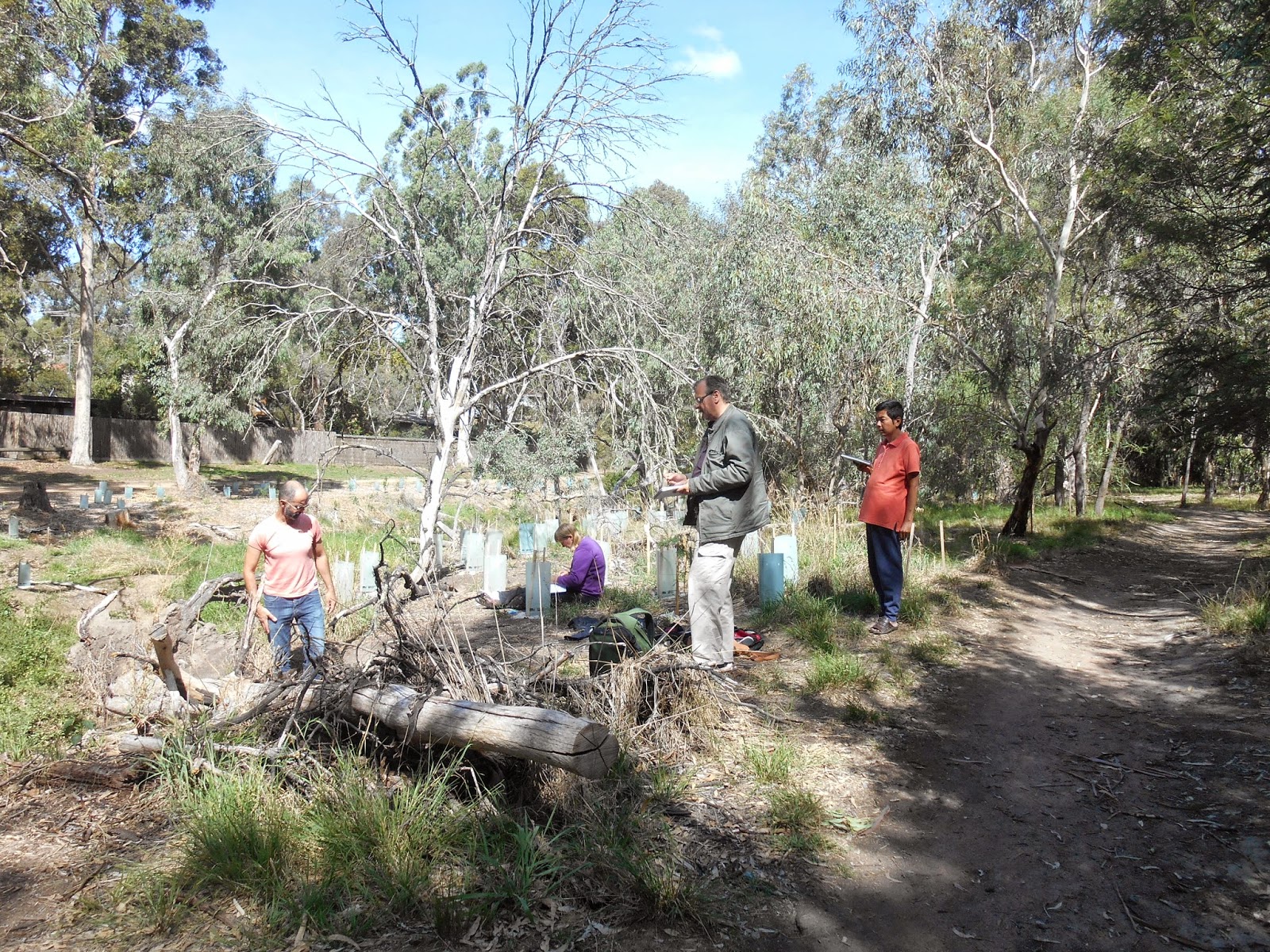 Fusion has reignited its art practice for 2015 with a celebration of last year's works, putting the finishing touches on some wearable art and planning for the year to come!

We finalised our t-shirt design process, pressing a series of layered portraits we had created in-house onto shirts that were worn directly out of the studio.

Geoff, Trung, Kate  and Abdi put their brains together to formulate some ideas for further exploration this year.

Through these great discussions, we drew up a group vision of:

Fusion Arts Studio was formed in 2014 and grew out of Chippendale Lodge SRS Pop-Up In house Studio, which began in July 2013 with a four week intensive, to build interest, test the waters, find out what art forms residents are most interested in.

SELF * PLACE * COMMUNITY:
The main themes of creative exploration by members of Fusion Arts Studio in 2014, whilst visiting local arts venues and locations. 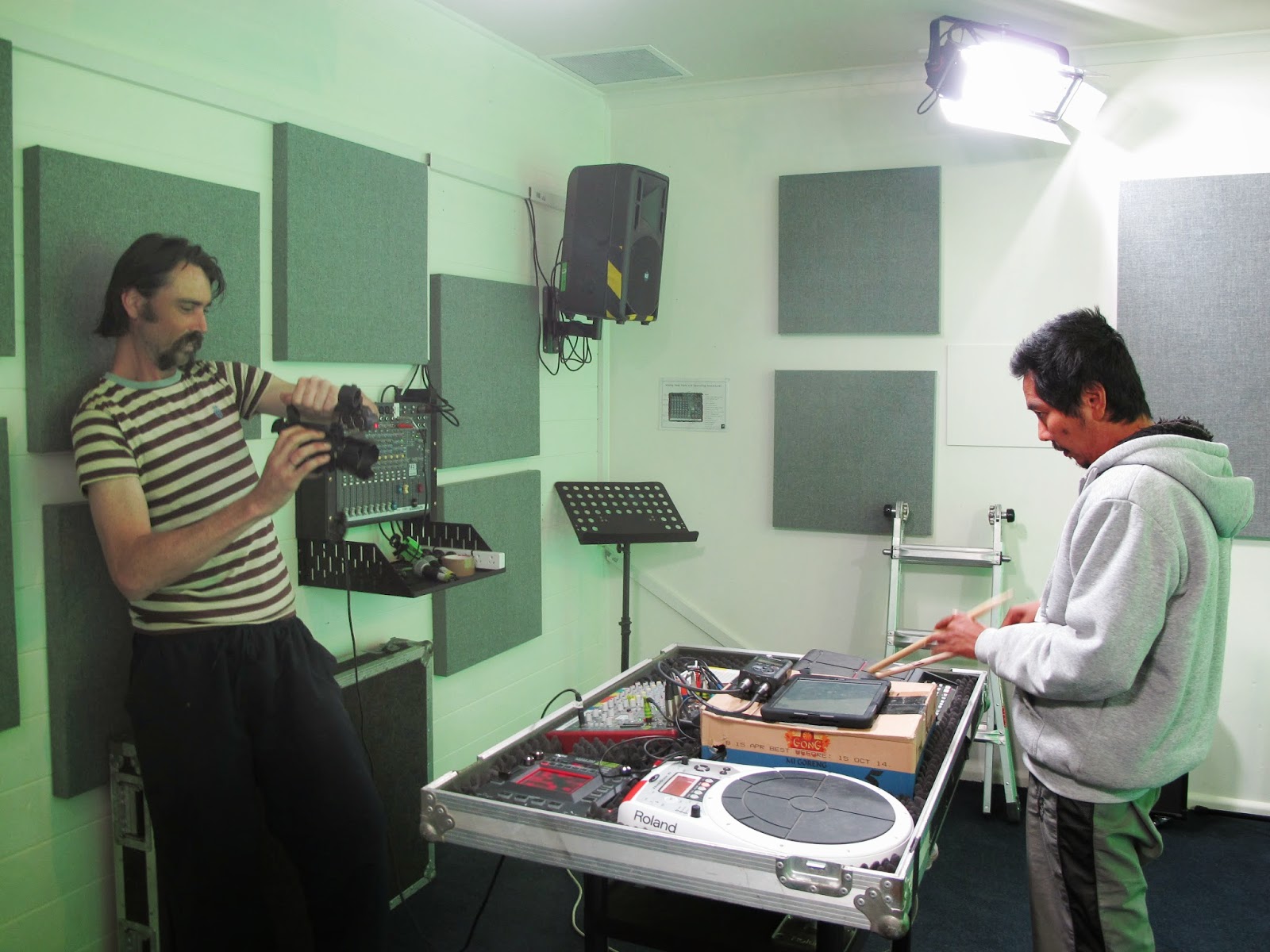 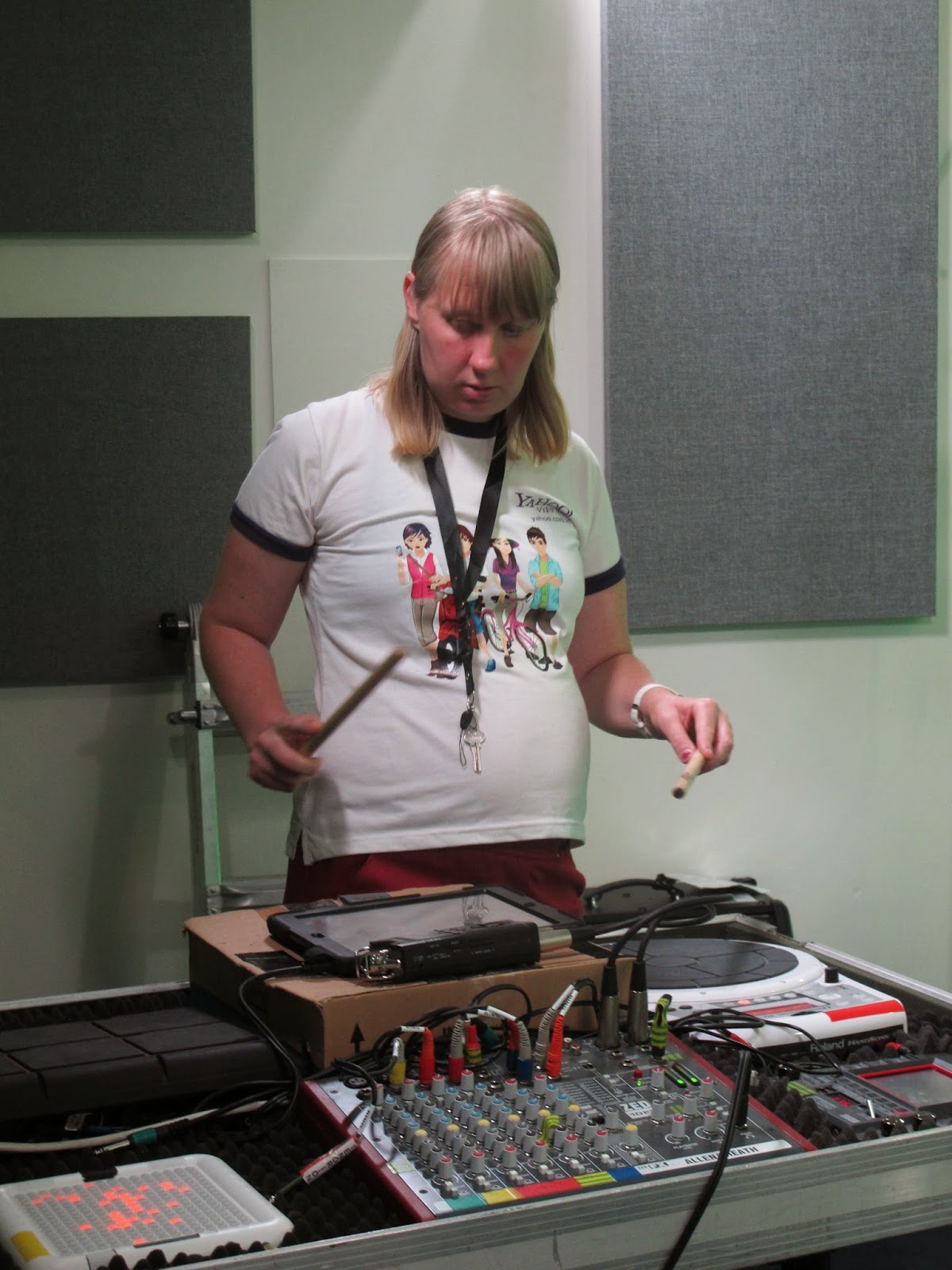 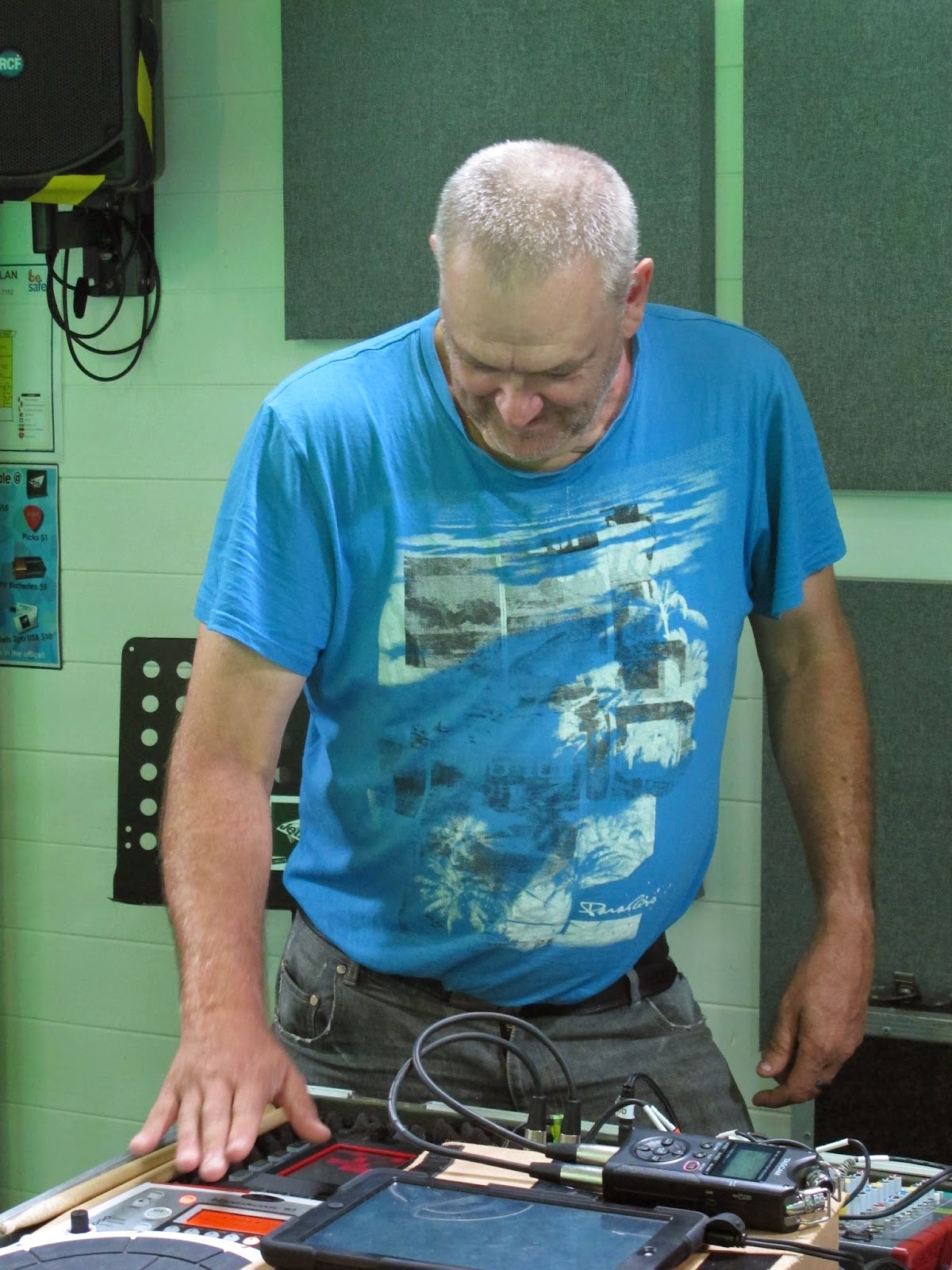 Above left: Kate on the electronic drums
Above right: Geoff creating haunting sounds on a theramin-like instrument. Photo credit: Rachael Walker
Jets Studio has a fabulous range of instruments for creating music and sounds, including fully accessible devices, such as the theremin-like instrument shown above (right). Regardless of skills, knowledge and ability there was an instrument for everyone to explore.

I go to the theatre
Movies restaurants

Fusion Arts Studio visited sections of the trail, to learn about the history of arts in their local community and to immerse themselves in the local natural beauty. There the artists took photographs, made sketches and frottage drawings of native flora. 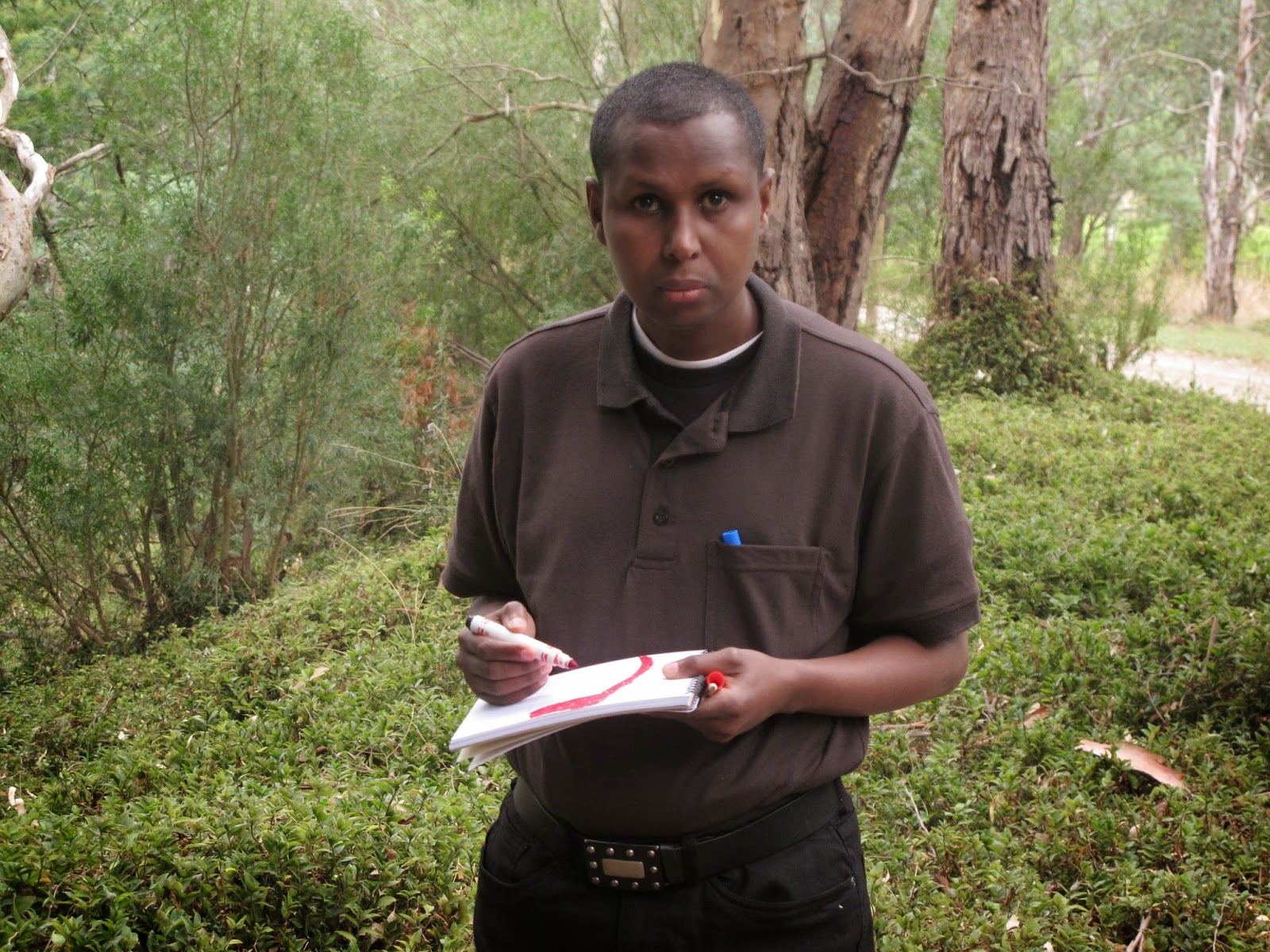 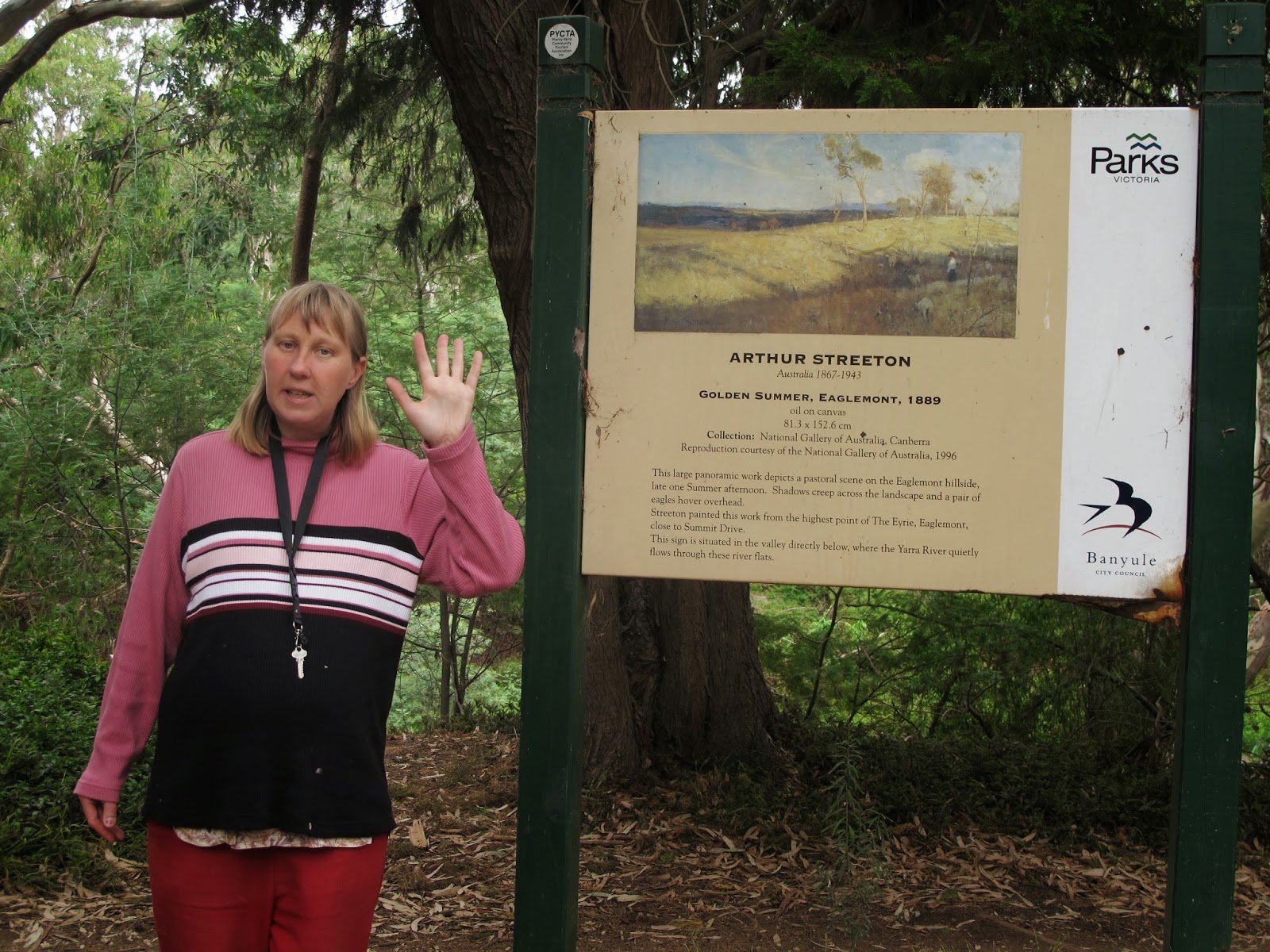 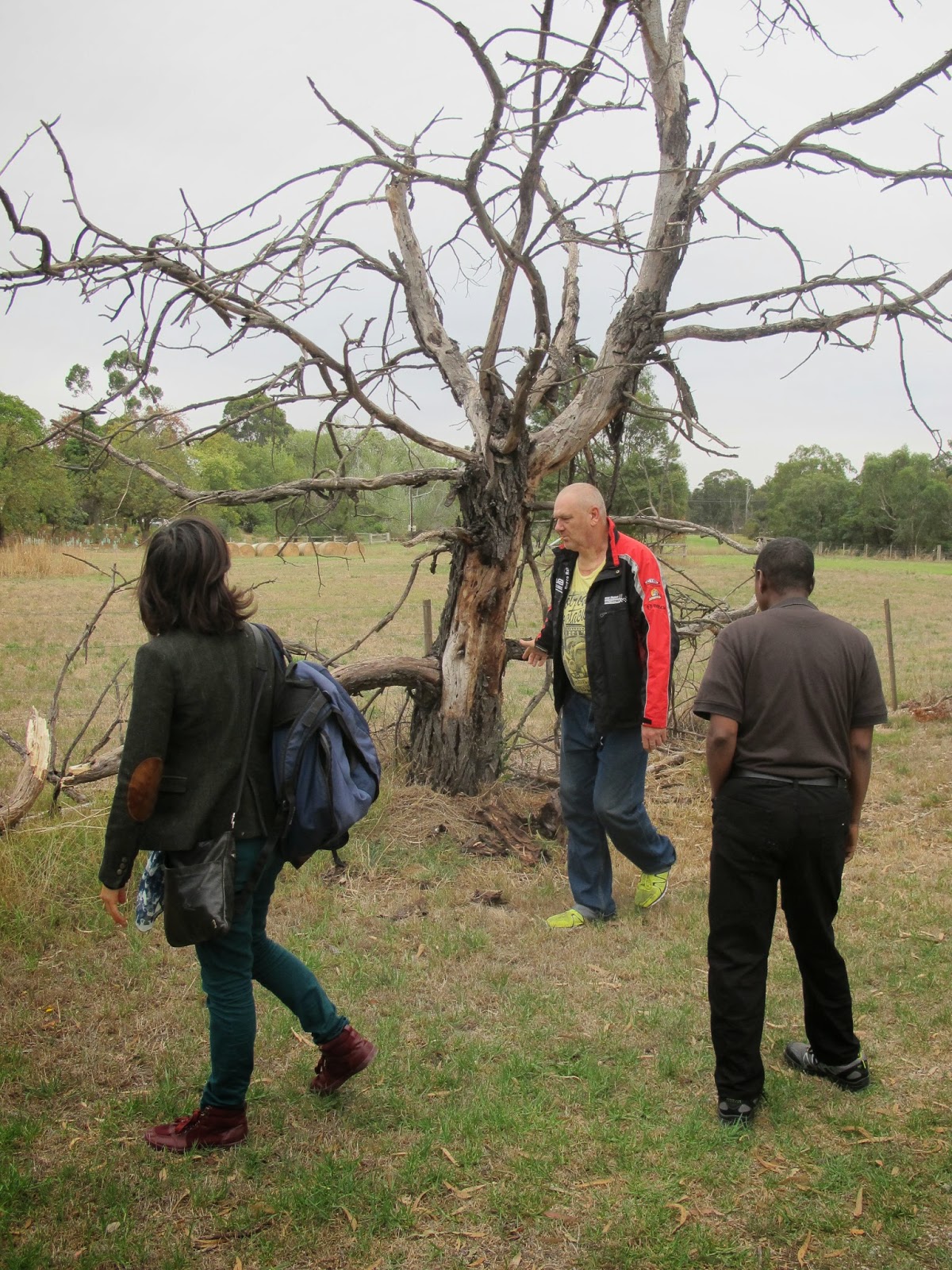 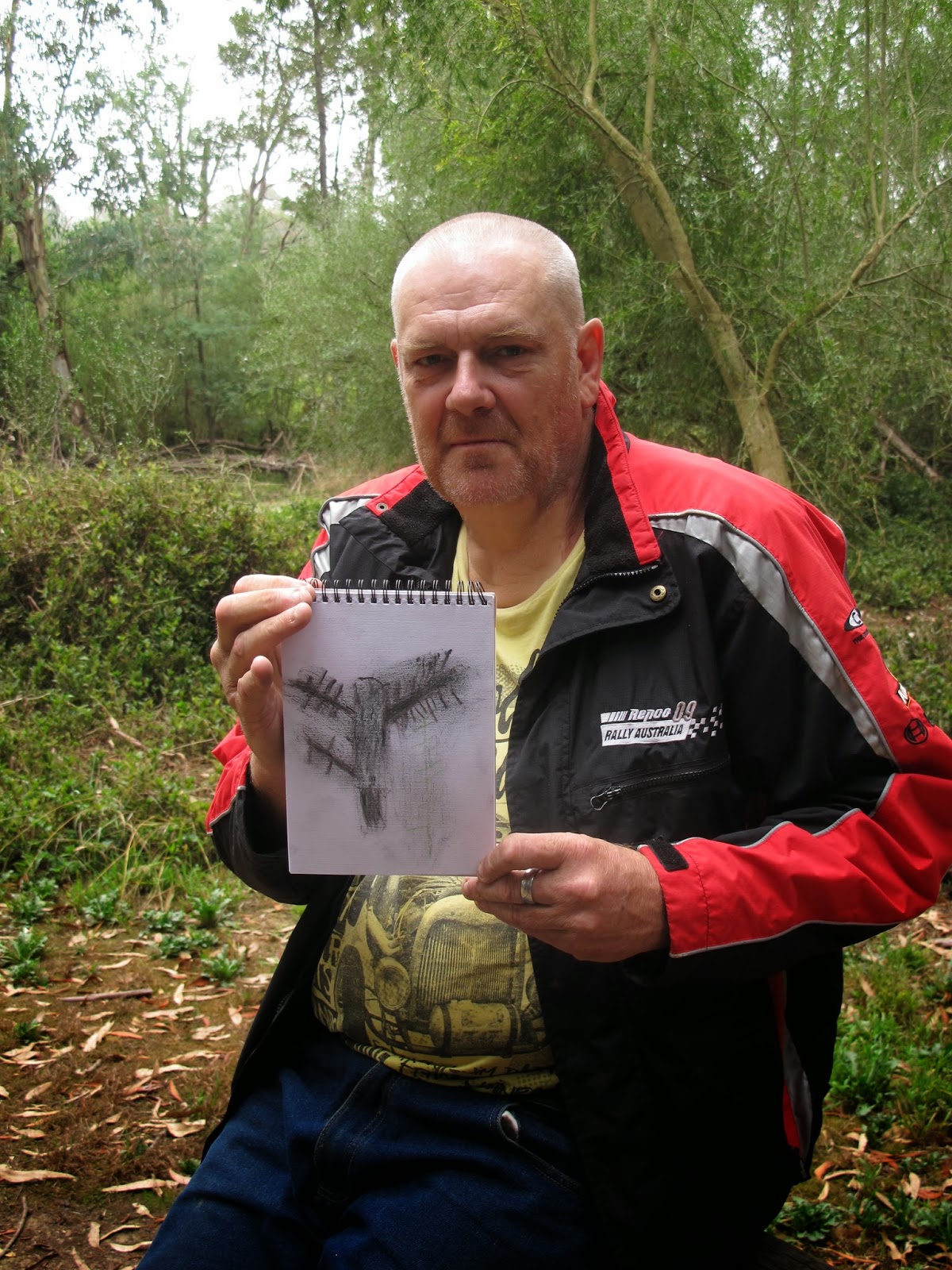 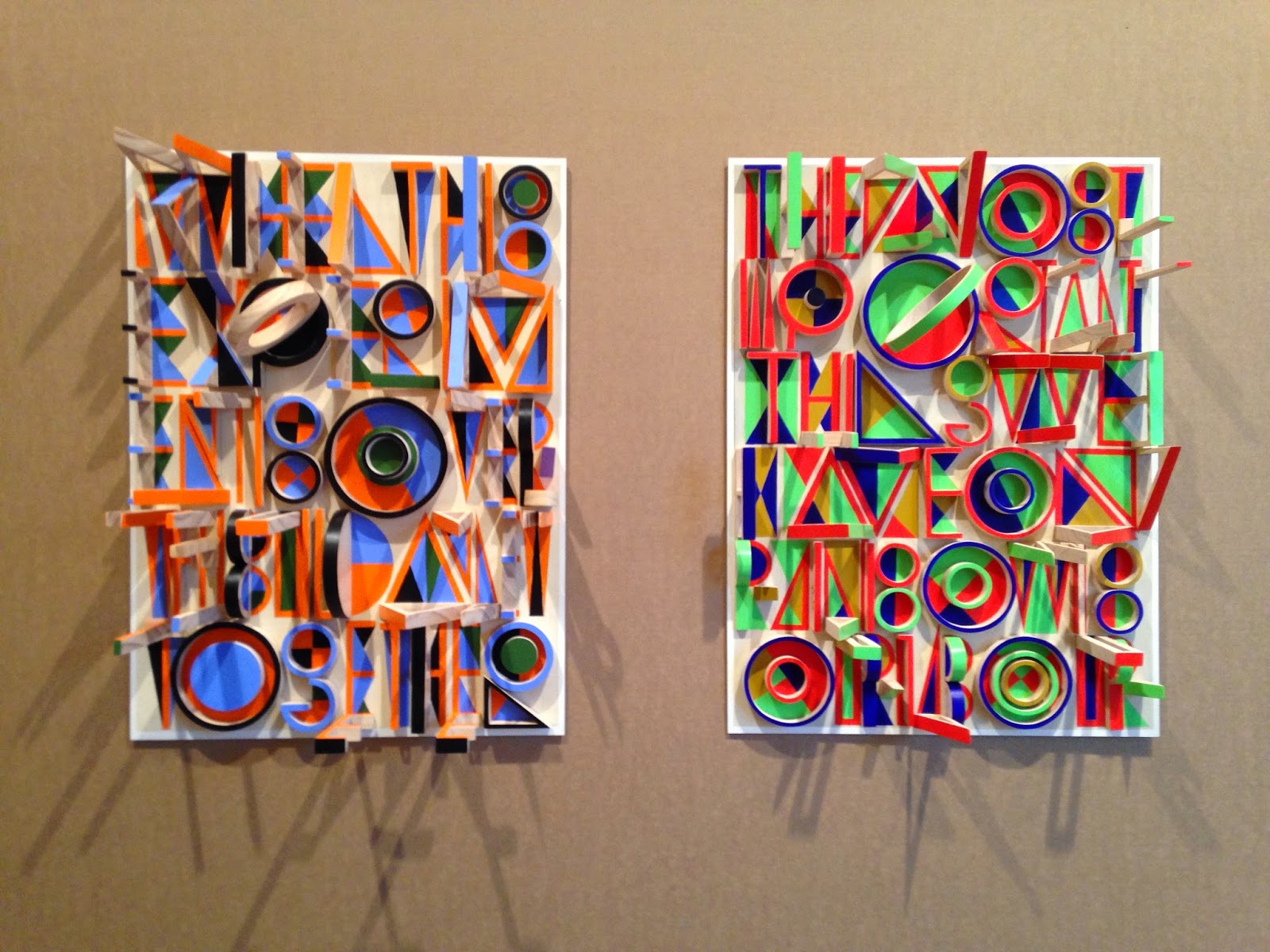 Above: Artwork by Melbourne-based artist Emily Floyd from the Far Rainbow exhibition 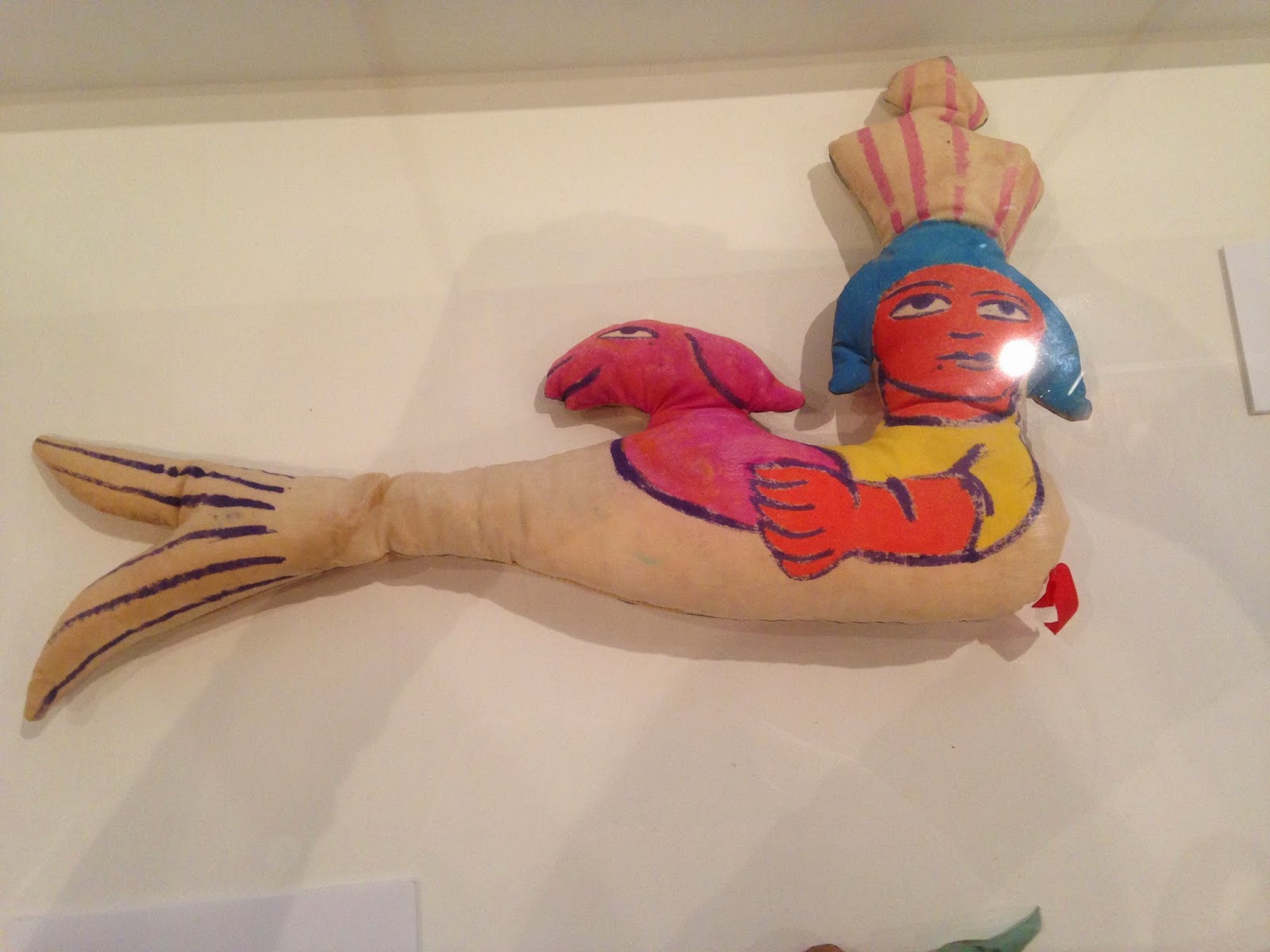 Above: Soft doll sculpture by Mirka Mora, one of the works shown in the From The Home of Mirka Mora exhibition. 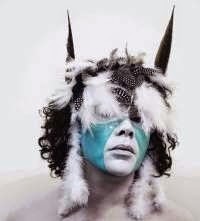 The group visited the Banyule City Council art gallery, Hatch contemporary Art Space, to see the Seventh Skin group exhibition. There they met with gallery curator Claire Watson, who gave them a tour of the show, sharing information about each artist and their work.
Seventh Skin featured the work of over 20 Australian artists, exploring the theme of identity via costume, garments, make-up and fashion.
"Feeling 'comfortable in one's own skin' is an expression that has multiple meanings in today's age. This exhibition asks 'Just how many layers do we present through our public fae to the world?' and 'Exactly what is real and what is disguised or concealed?'"