This term, the group have moved towards making 3-D works, taking inspiration from their immediate environment...


An interview with Peter Quinn about his window gallery at Green Haven...


Describe your window gallery
"There's a South Melbourne t-shirt, the lanterns which represent Sydney and Collingwood colours and the banner representing Collingwood, Melbourne, Essendon and the Magpies."

When did you first play football?
"When I was 16 years old. I was talked into it by one of my mates. I just wanted to play footy at school and then I just went and played in a competition, the South Melbourne districts, from there I ended up in south melbourne under 19s. Played for them for about 4 years and then gave it away. It's not an easy competition."

Whose your favourite team?
"Sydney - red and white. My second is Collingwood."

Why do you make art about football?
"Cos that what I think I'm talented to do."

Could you ever give away football?
"No. Never."


...........
Fi and Tanya did their best to keep up with the now furious pace of the Green Haven studio. Armed with spray bottles of fabric ink, the group made impressions on scarves today, the usual themes of football clubs and pop singers rearing their head again!

Kylie was sad to have missed the Michael Bolton concert so took to a singlet to create a colourful petition, to have him come back and play again!

Anna is creating a very clear creative vision for her works, undertaking several processes learnt over recent sessions, including stencilling, figurative painting and printmaking onto fabric.

Steven has decided to have some of his works on paper framed in a collection he would like to call Shapes and Sizes.

Most artists have planned ahead for next week's sessions and requested materials accordingly!

Anna put the studio's new fabric markers to use on a cotton t-shirt, experimenting with patterns and figurative sketches inspired by her home.
She then moved onto a pop-up birthday card for Kylie and a painting on stretched canvas - Anna's first with us.

Kylie's fan art developed another dimension with the Power Rangers featuring on a multimedia woodblock as shadow figures beneath Sibe's towering image.
Peter applied fabric paint to a t-shirt to create a Swans logo whilst testing our football knowledge.

Next week, we'll feature the window gallery that Peter has set up from his bedroom and a short interview about his work at Green Haven.

Our last session before the Easter break was productive and typically, musical.

Ross gifted a personalised frame portrait to Ana for her birthday.

And the Green Haven gallery now features hanging shrines of the artists!

As a way to reflect on the past six months of bustling creativity at Green Haven, we poured through piles of photographic prints displaying the colour and character of this studio.

This extended into a hanging gallery. 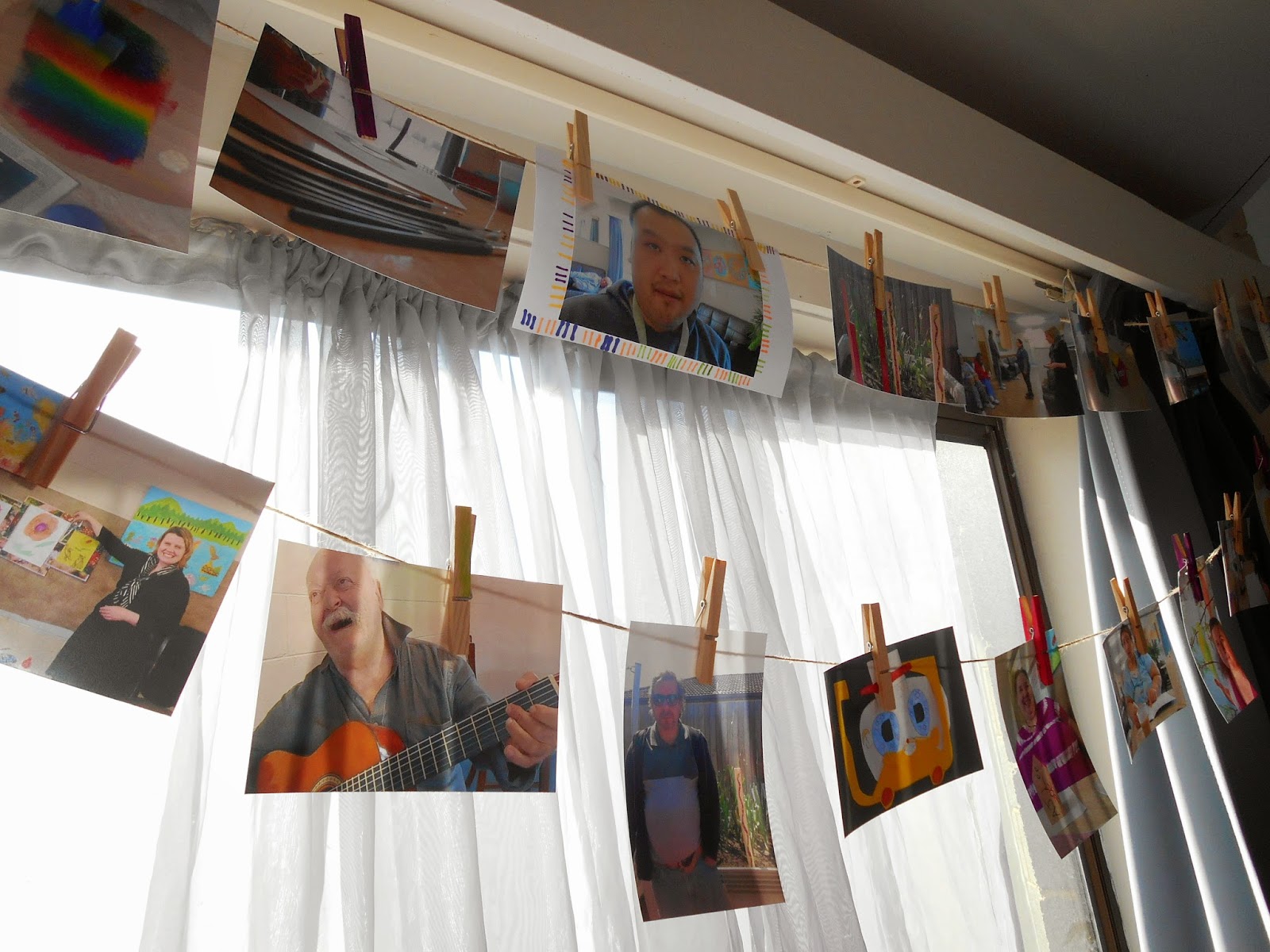 Quang and Fiona collaborated on some interesting frames for the prints.

And Sibe took her textas to a canvas bag. Thoughts about putting wearable works like these on sale somewhere.... 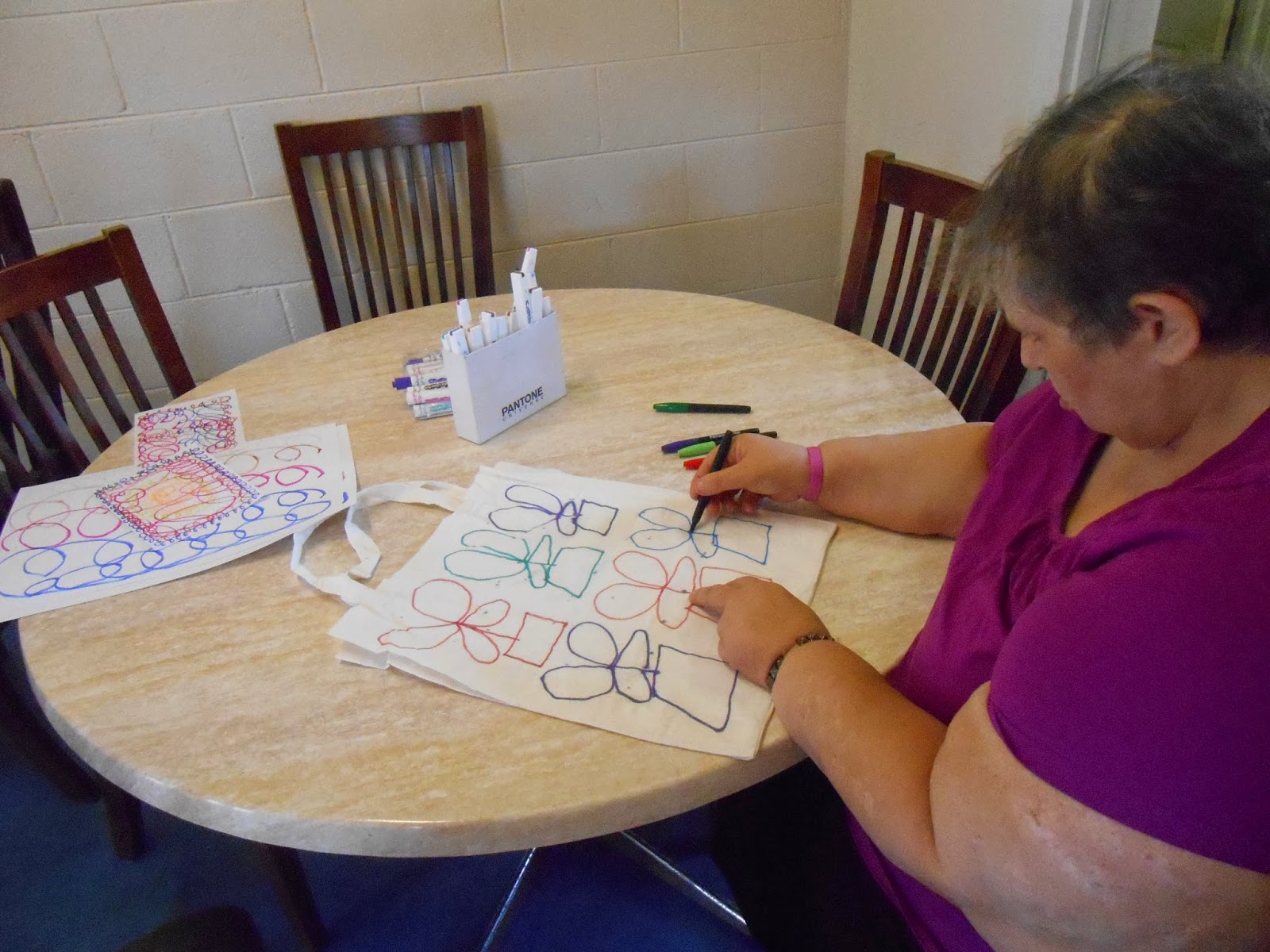 
Have a look at Green Haven Studio's burgeoning in-house gallery! 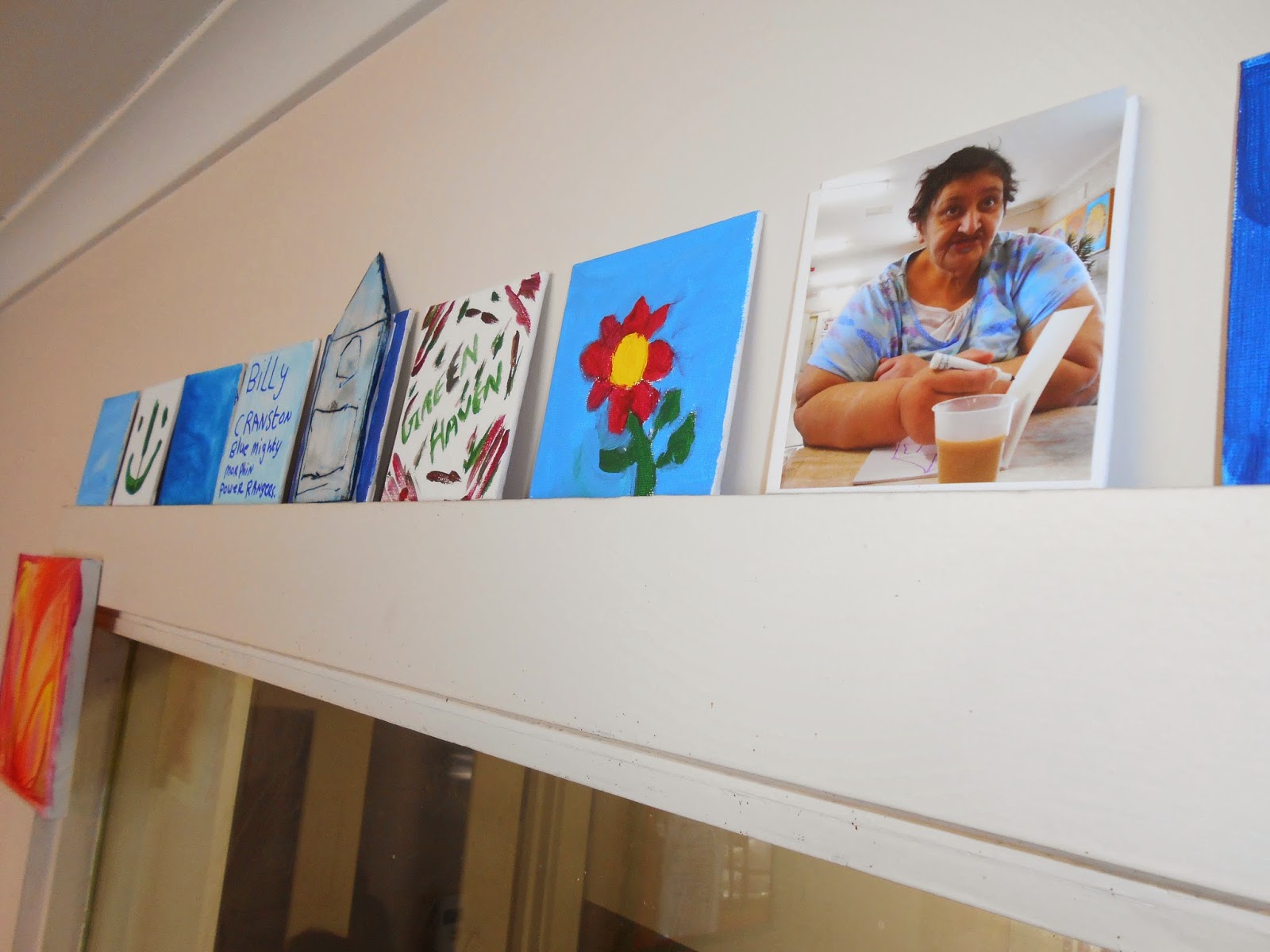 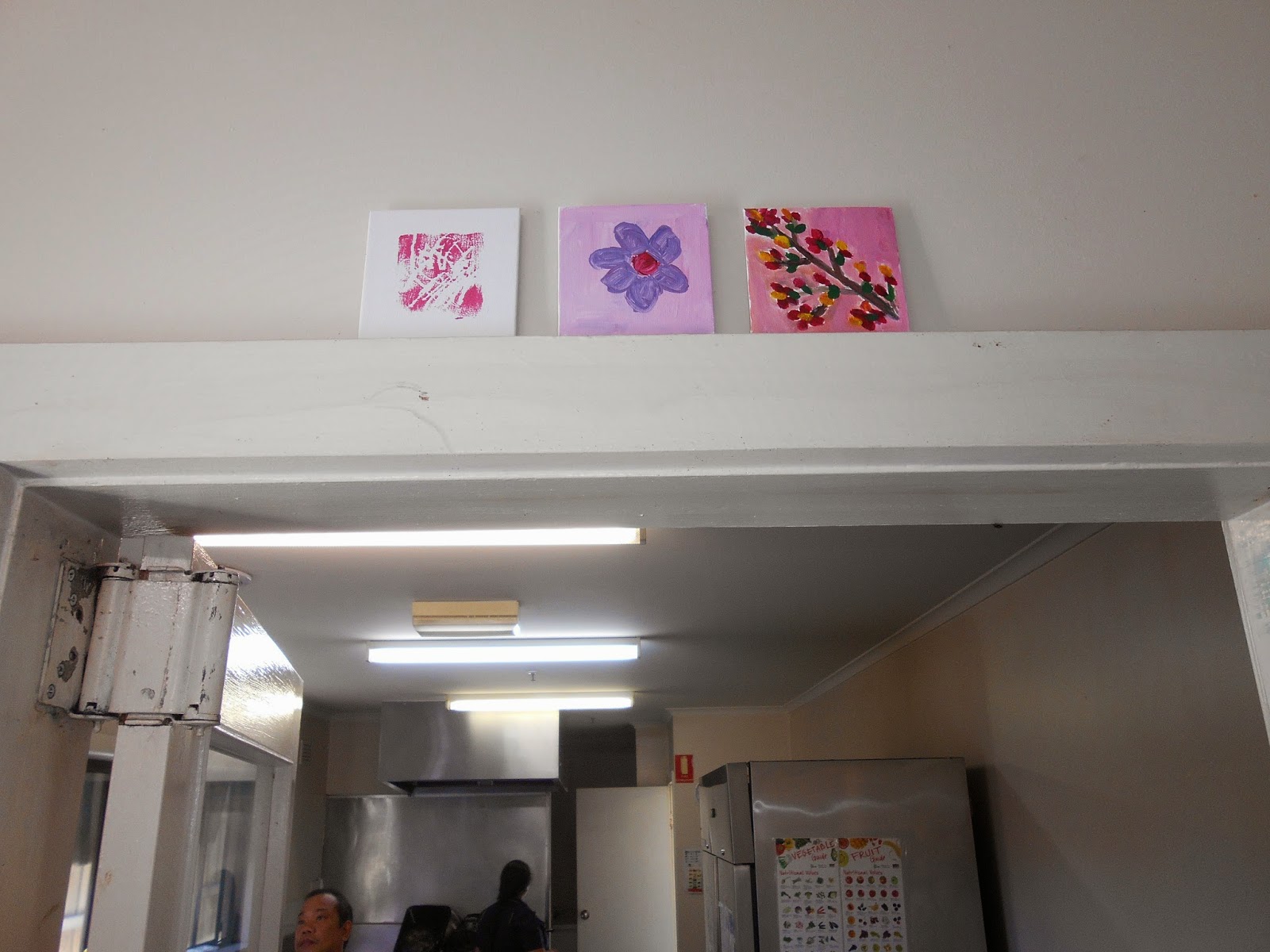 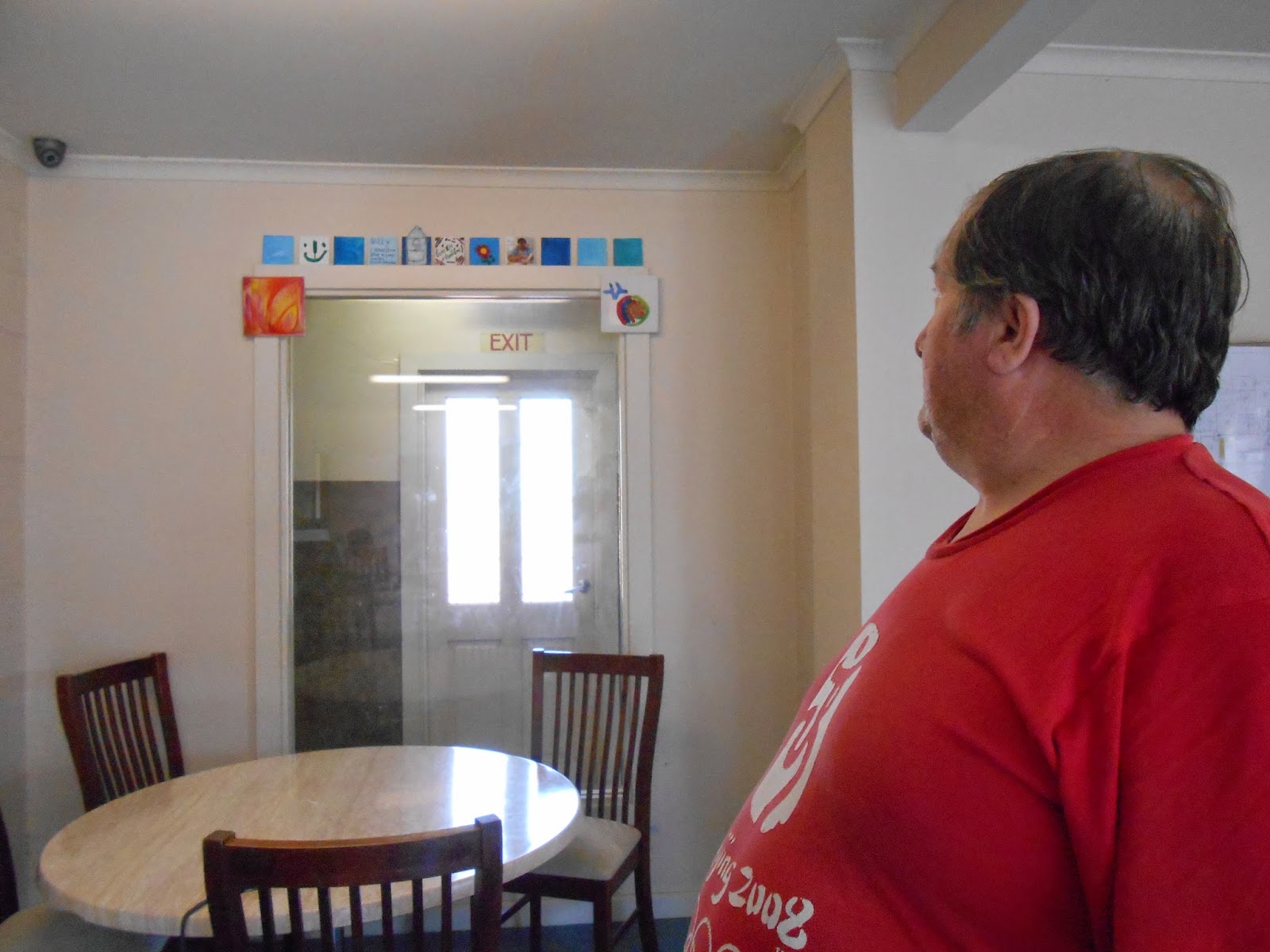 
The Green Haven artists have reemerged into the studio space, launching back into practice or feeling out ideas for the year to come. 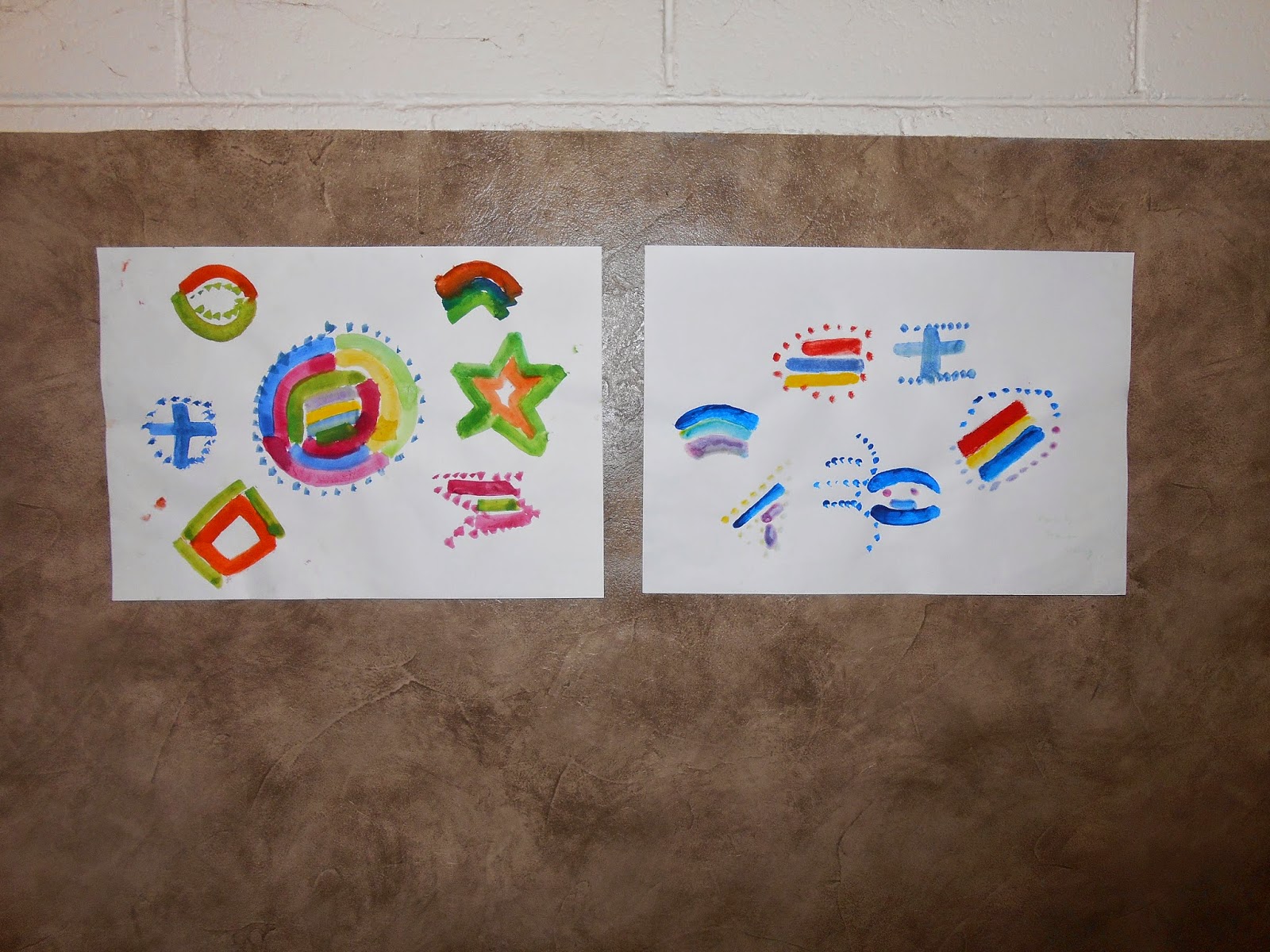 Greenhaven SRS has emerged as a colourful, sound-abundant multimedia art space, bringing a myriad of culturally and linguistically diverse artists into creative conversation in their own home.

The SRS studio practice has honed in on individual talents in song writing, dance, folk storytelling, painting, printmaking and collage. Unique to this SRS in Footscray is the wide spread of personal histories spanning from far reaches of South East Asia, Central Europe and beyond.

An enjoyable challenge for the staff on board has been to connect with the unique language set of each individual. Puthia for example has embraced expressive dance and folk singing as a modality through which to tell his personal history of life in Cambodia. This resulted in the making of a pop song in Khmer, filmed on site. Puthia's first expression of this part of his personal story emerged whilst flicking through a travel brochure, selecting images for a collage and spotting a famous Cambodian landmark.

The artists speak to each other commonly through song. When Anna strikes up a rhythm on the bongos, the artists magically emerge from their rooms. Benjamin leads with guitar and a serenade in Spanish, Sibe speaks with heart of Albanian tunes, Irene rolls in to bask in the ambience and Puthia steps in sequence, raising his arms and humming emphatically.

Some highlights of the studio sessions have included:
- Anna inviting Irene to feel comfortable participating in a percussion jam, utilising shakers the artists themselves made.
- Sibe directing her own self-portrait photography shoot with confidence, requesting particular angles, lighting and print outcomes.
- Hahn, feeling inspired by the rich sounds of a musical house, contributing a flower drawing to the group then moving to produce a series of flower paintings, soon framed and mounted on the dining room wall.
-Ross' incredibly detailed pencil work depicting the multifarious characteristics of wild animals.
- Seeing Ross inspire Puthia to draw - not his first choice of expression - with a colourful depiction of a snake using textas on timber planks.
- Accompanying Puthia on a journey from a very shy conversation to a proud multimedia presentation of his stories.
- Watching Kylie's passionate fan art, dedicated to boy bands and cult shows of a bygone era, unfold over various platforms!
- The growing sense of pride which Steven took to his richly symbolic watercolour painting practice. Steven purchased his own set of paintbrushes to develop his personal studio, a specific goal that he had set at the start of the year.
- Watching the practising arts community within Greenhaven House grow as friends encouraged and inspired each other to take their hands to new media.
- Being treated to regular performances by Anna, Constantine and Puthia. Just magical.

In 2013 a six week intensive of weekly visual arts workshops was held at Green Haven SRS Studio as a way of introducing artistic possibilities and gleaming individual interests and aspirations.

"We want to allow the participants to break free of old fears and limitations surrounding ideas about what art "Should" be, and who is and isn't able to be creative. The aim is for this safe space we are generating, to feel inclusive and their artistic processes to be expressive." Jade Burstall, Lead Artist 2013